There is so much history to this place. The metro tunnel is 624m long, it opened in 1888 and closed in 1915. Some believe the tunnels are haunted as there have been a number of deaths here. Since their closure they have been used as a mushroom farm and a water reservoir.

I have been meaning to get to this location for quite some time. Little did I know how easy it is to get to once you know where it is. I arrived just as the sun was going down, which was perfect timing as I could get both daylight shots of the entrance plus could hang around till it got dark enough to get some photos of the glowworms. 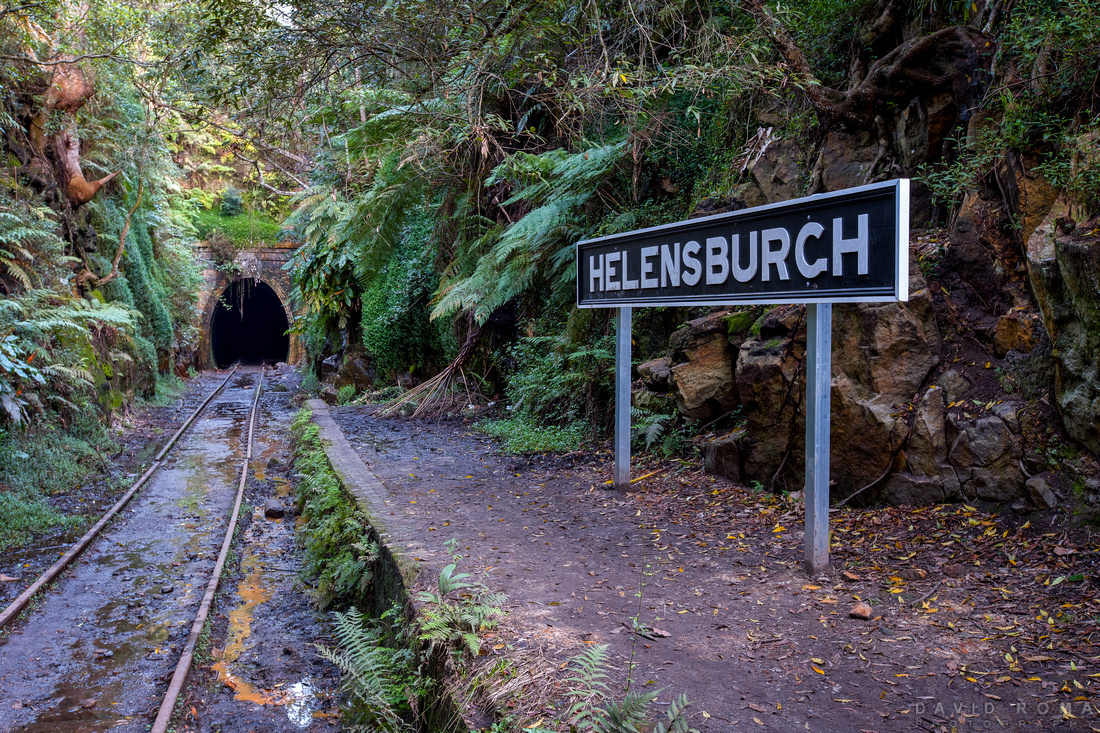 The original sign was replaced by this flash one in 2012. Depending on the amount of rain the tunnel can flood all the way up to this point. It leaves the tracks quite muddy. Fortunately it was dry enough I was able to venture deep in to the tunnel. I was stoked about how easy it is to access, it is only about 50m from where you can park the car. I love how green it is here. 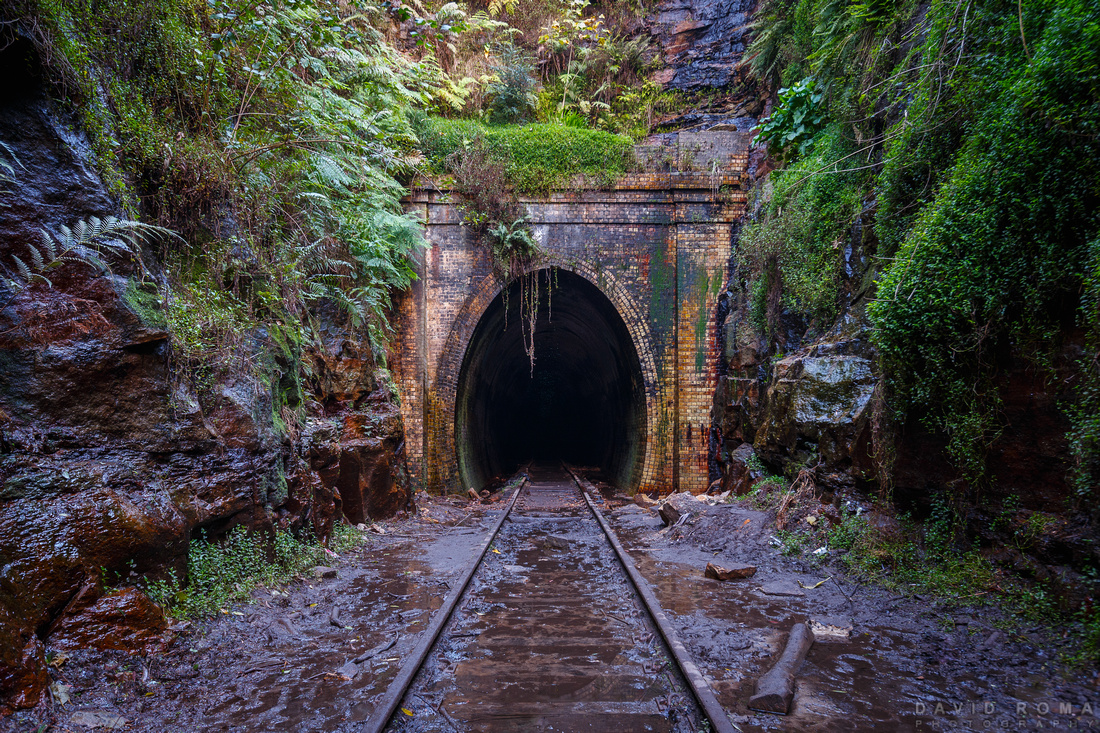 A classic view of the entrance to the metropolitan tunnel in Helensburgh. When it has been raining a waterfall forms which runs down the right hand side of the tunnel. I love the moss and ferns in this place, makes it feel other worldly and so close to Sydney makes this a quick escape from the big smoke. You can see how muddy it is, I had to balance my way down the tracks to avoid getting too muddy. 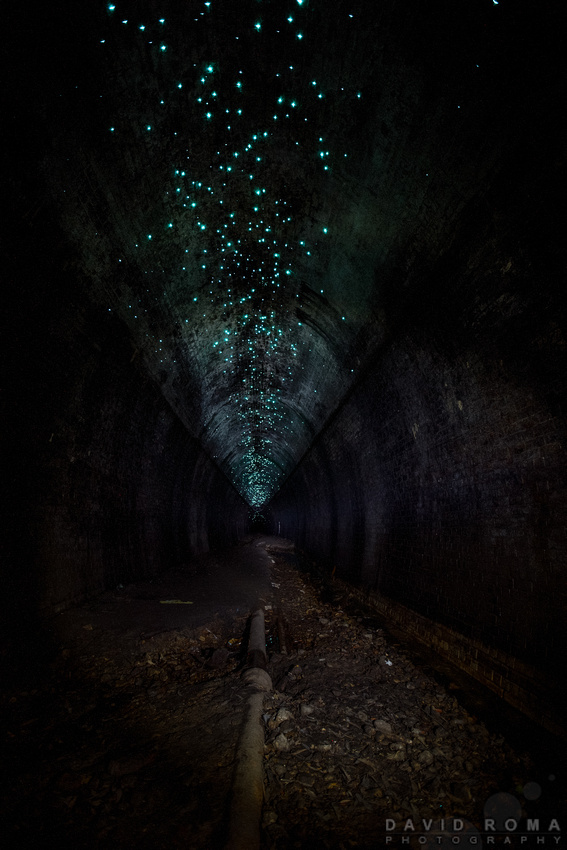 I was pretty stoked to see how many glowworms there were in these tunnels. Right in the city. I saw more glowworms in this tunnel than the 'Glowworm Tunnel' in the Wollemi National Park. This is the view looking south not too far into the tunnel. Glowworms are so hard to photograph. They are dimmer than the stars, fortunately they don't move as fast. To capture the glowworms I needed a 2min exposure at f2.8 and high ISO. 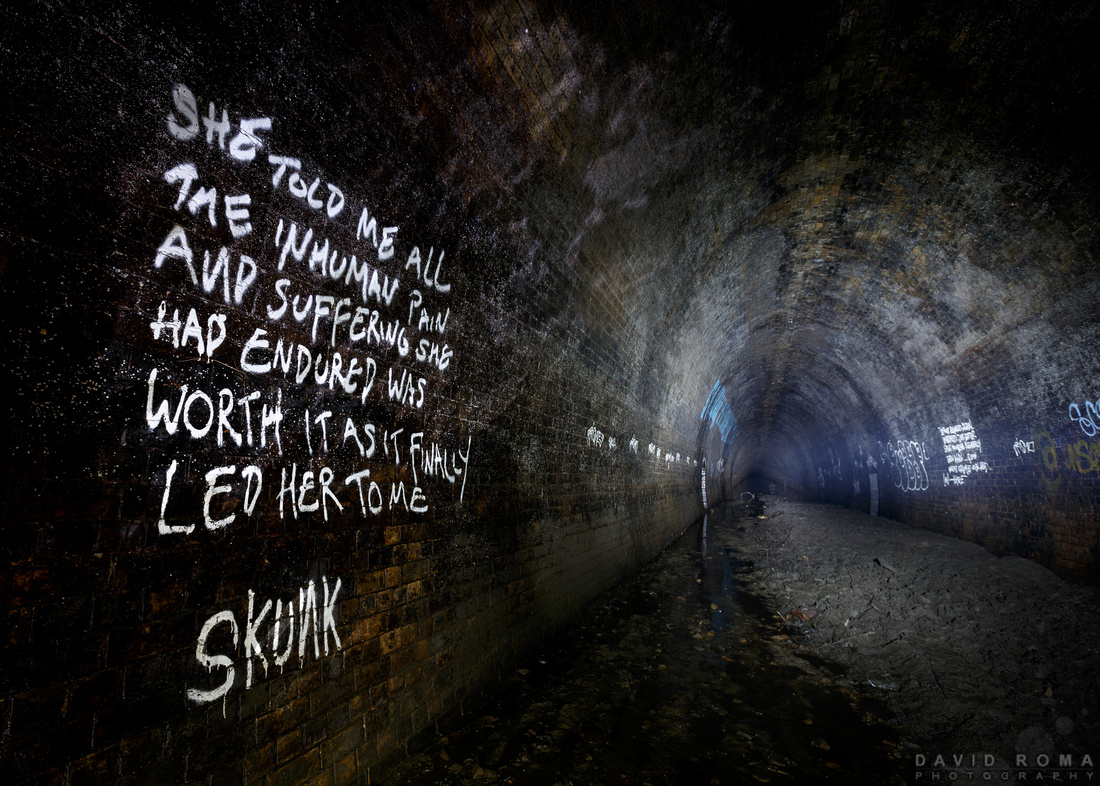 Moving deeper into the tunnel the glow worms have gone. I think this is because the tunnel regularly floods above this level so they cannot live here. It is pitch black at this point so required some light painting with our torches in order to expose anything. This shot is taken at f5 to get a little bit more depth of field and over 30 seconds. It was quite eerie this far down, and the graffiti capped it off.

"She told me all the inhuman pain and suffering she had endured was worth it as it finally led her to me... Skunk"

Awww.. Well I am happy for you Skunk. To be honest I was expecting a much darker messaged painted here.

The end of the line 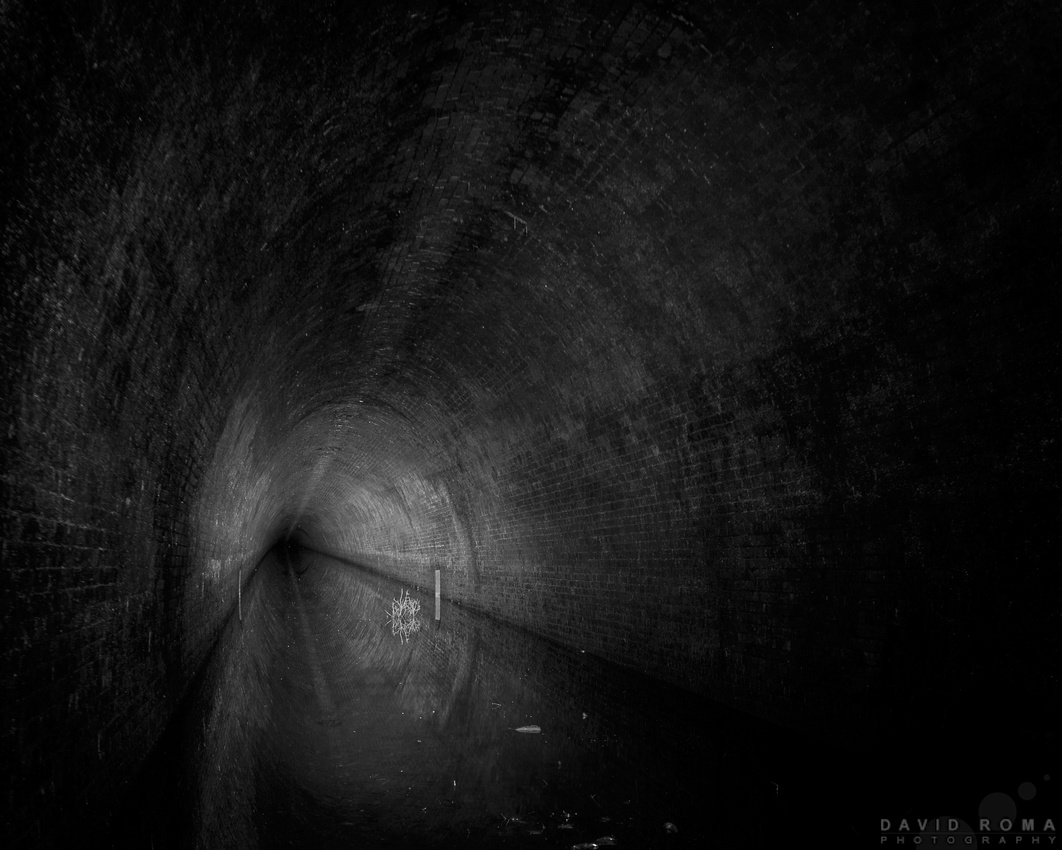 Well I made it to the end.. Well as far as I could get without a swim anyway. I nearly lost a shoe to the thick sticky mud and it took a while for my tripod to settle in to the mud before I could take my shot. There is an urban legend that there is an old steam train under water down here. I love the thought of how it might look but I certainly was not curious enough to get the scuba gear out!

You can see the water stretching out closing the tunnel off in the distance. I love the tones and reflection in this image so thought I would process it in black and white to really emphasize them. 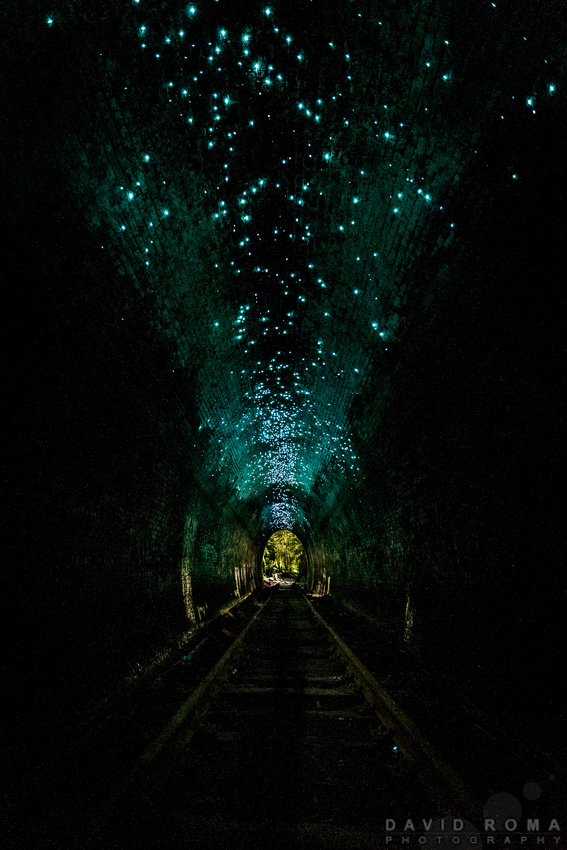 The glow worms looking out of Helensburgh Metropolitan Tunnel. I love this shot. You can see the tracks drawing your eyes out to the greenery outside. The sun had set and outside was quite dark, barely visible to the eyes, but over 2.5mins at high ISO it nearly looks like daytime. It's amazing to see just how much light the glow worms give off, you can see the roof and even some of the walls are lit green. There is also a super bright little fella on the bottom right near the tracks. It certainly took some experimentation and patience to get this shot. In fact just when I thought I had it set up right my battery ran out! Long exposures really sap the juice. It meant a run/walk back to the car to get the spare. But after seeing the result, I am glad I went to the effort. I hope you like this shot as much as I do :) 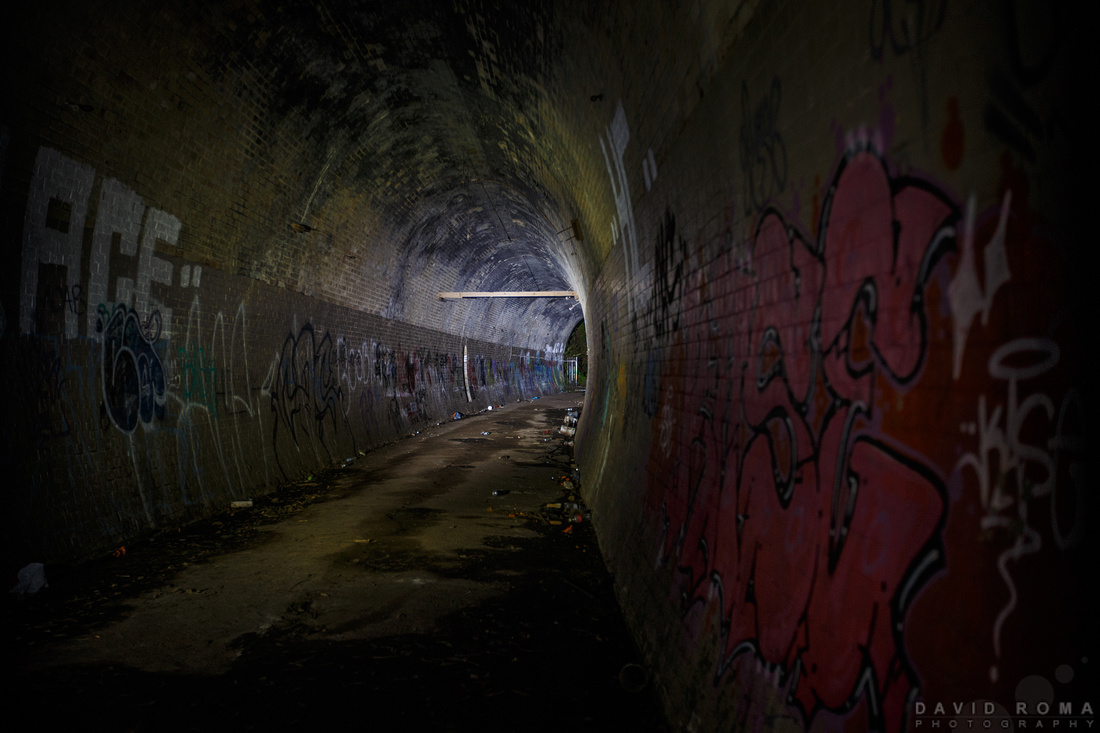 Just across the road there is another tunnel which is fenced off. This is a much shorter tunnel. So short in fact that you can just see the end of it in this shot. The tracks are no longer here, the walls are covered in graffiti and there is a beam across the center of the tunnel. This was the tunnel apparently used for growing mushrooms and there is still some electrical wiring about. As if it wasn't creepy enough I have heard that the metal beam has been used for suicide. Very sad. I would hate to be the person to come across that, perhaps that is why its all fenced off now. While the tunnel itself is quite dry, there was quite a lot of mud leading up to it, so was tricky to get close enough to put my lens between the fence to get this shot.... Back to the other tunnel now to end on a higher note....

Stars of heaven and earth 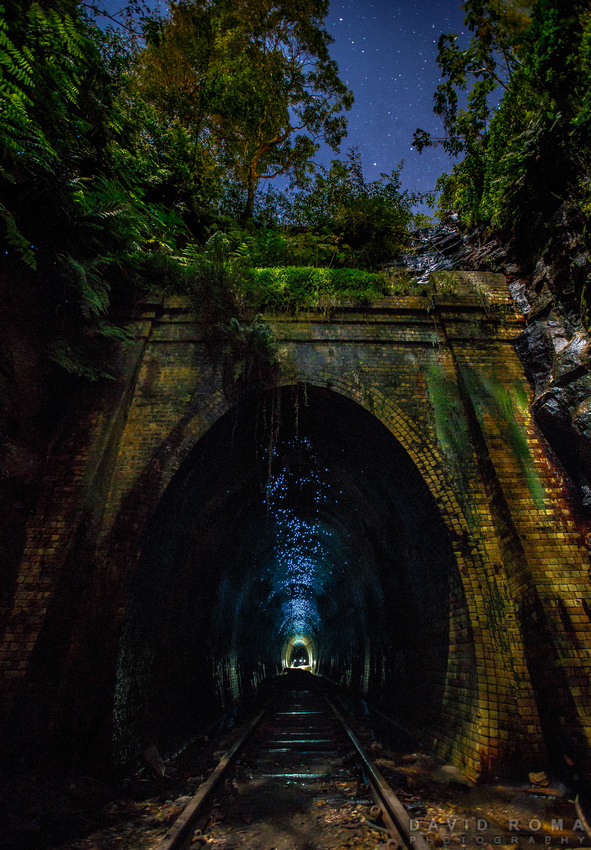 This is one of my favorite images of the series and perhaps all time. I love the connection between the stars in the sky, and the 'stars' in the earth. It's nearly like there are white holes in the sky (stars) because the little blue pieces of sky have fallen down into the tunnel (glowworms). The glowworms came out great in this shot and compliment the tracks leading your eyes deep in to the image where you can see some people with torches at the end of the tunnel. The nice green moss over the textured bricks and scattered light from the trees really add to the mood of this image. Feels like another world.

Well there it is. I hope you enjoyed this little tour of Helensburgh metropolitan tunnel. If you have any questions feel free to comment below. I have been getting a positive response on social media so far so I might look at doing another series soon.