Well that was fun. I was supposed to be heading out to the Gardens of stone on Sunday to get some more photos, but not surprisingly the highway was closed and it was forced to be canceled. Seeing as I was up and at 'em I thought I would go for a drive to Orange. 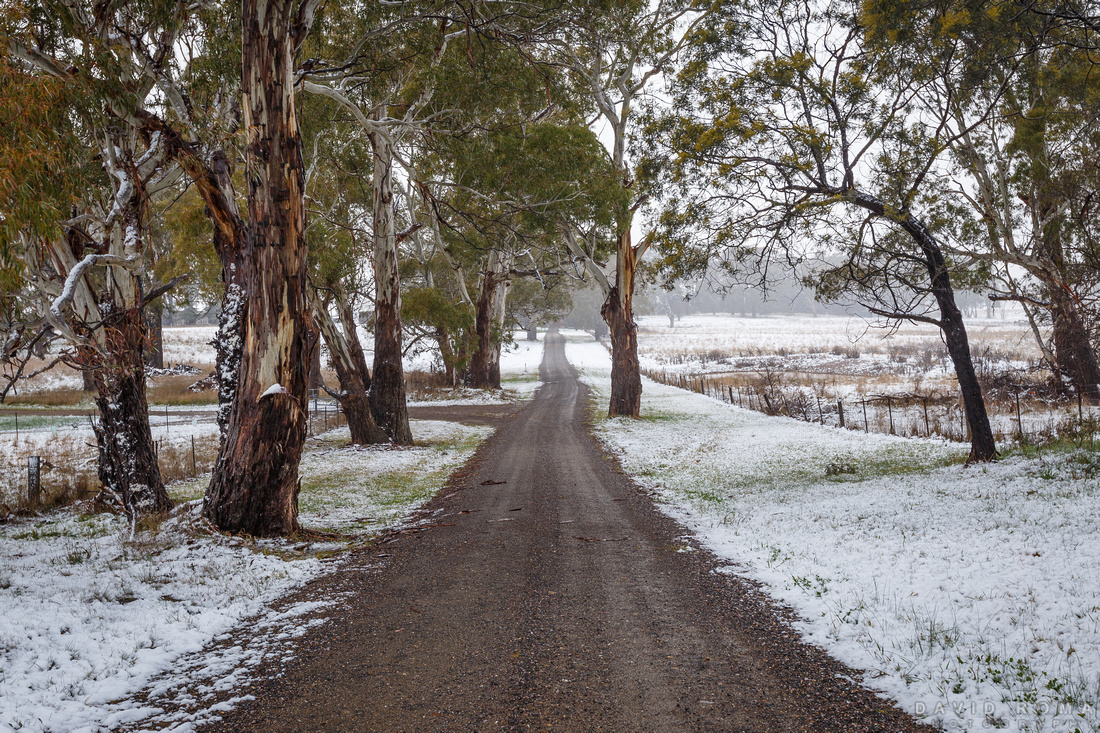 Snow on a road in Spring Hill

I had heard the road to Orange was closed, but it didn't seem to be. At least not the back way. I grabbed this shot near Spring Hill. A random dirt road sided by beautiful trees. 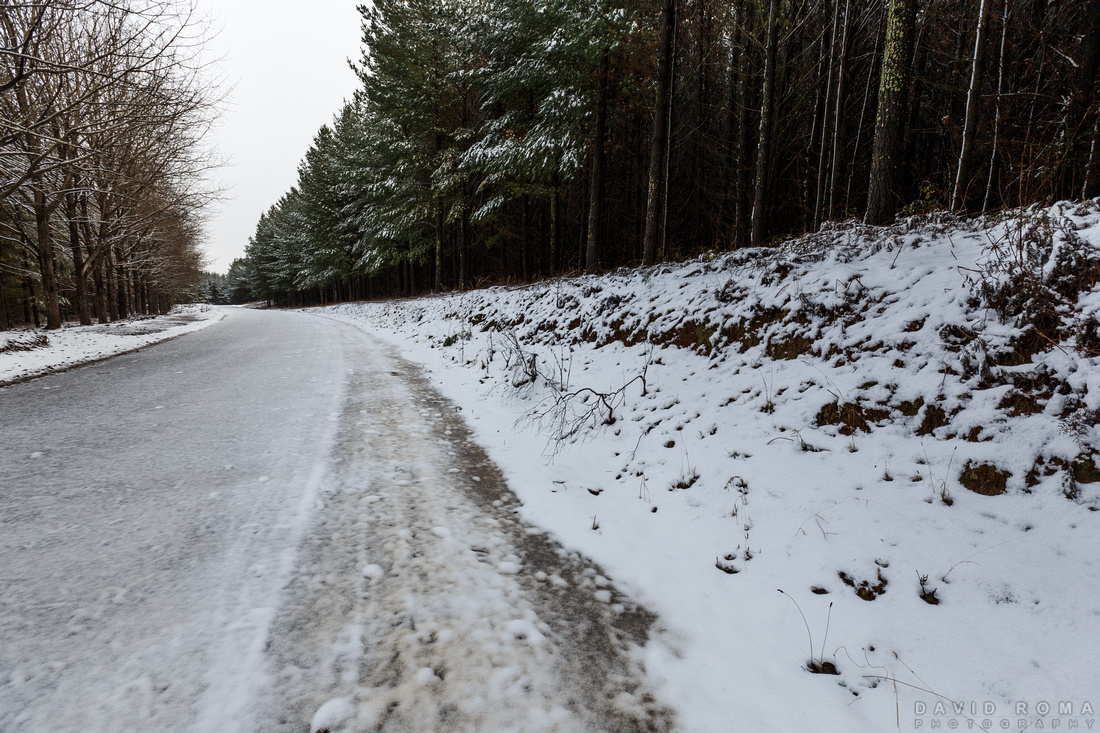 Heading toward the back of Mt. Canobolas things started getting real. I went exploring down one of the pine forest access roads which was covered in snow. 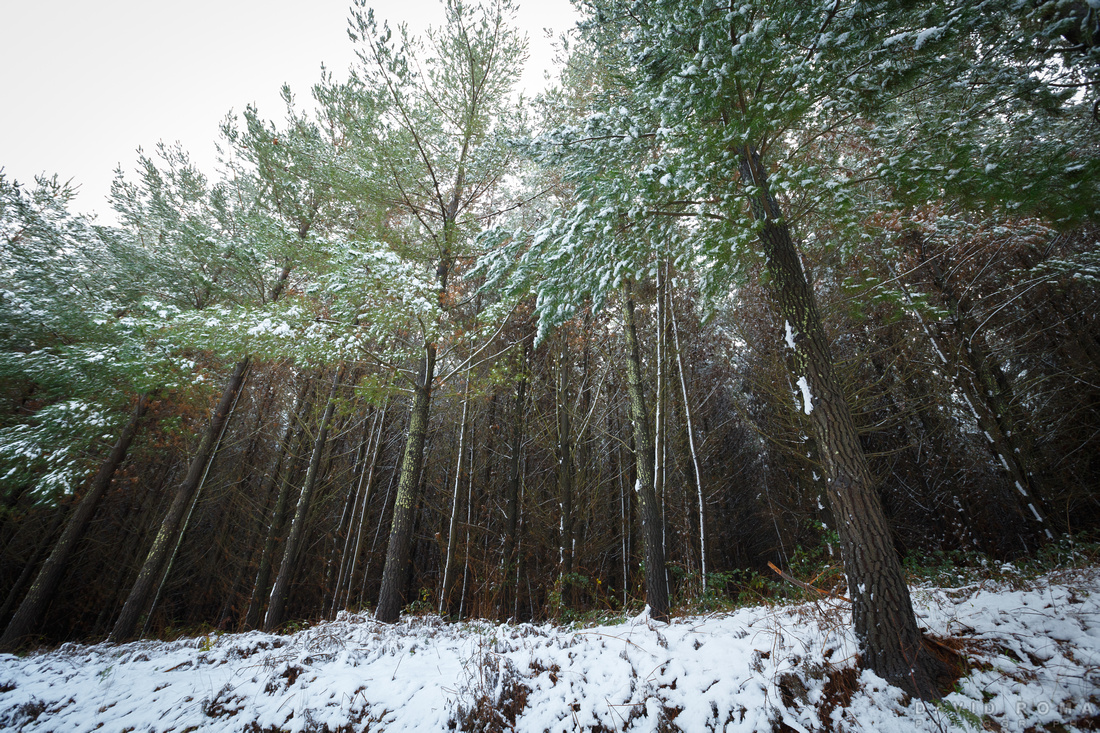 This is the view looking up at the pine trees beside that very road. 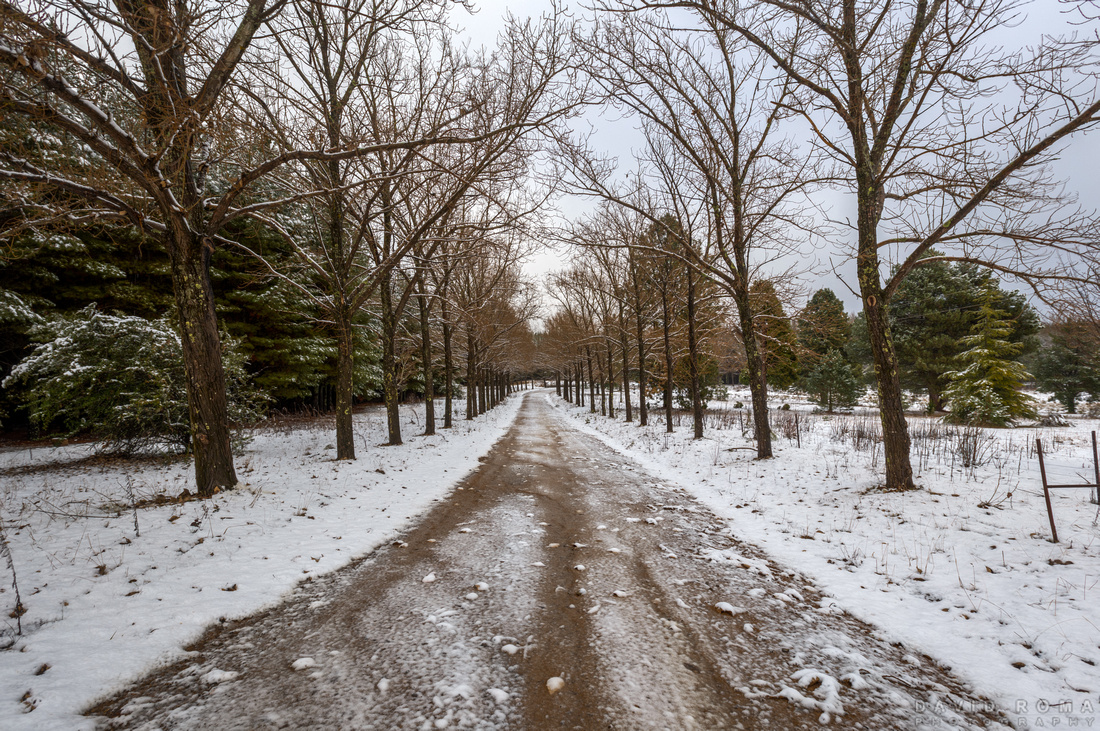 Another side road around the back of Mt. Canobolas had these deciduous trees which i thought looked pretty cool in the snow. There were a bunch of birds around this area so I switched to my telephoto lens and when hunting. 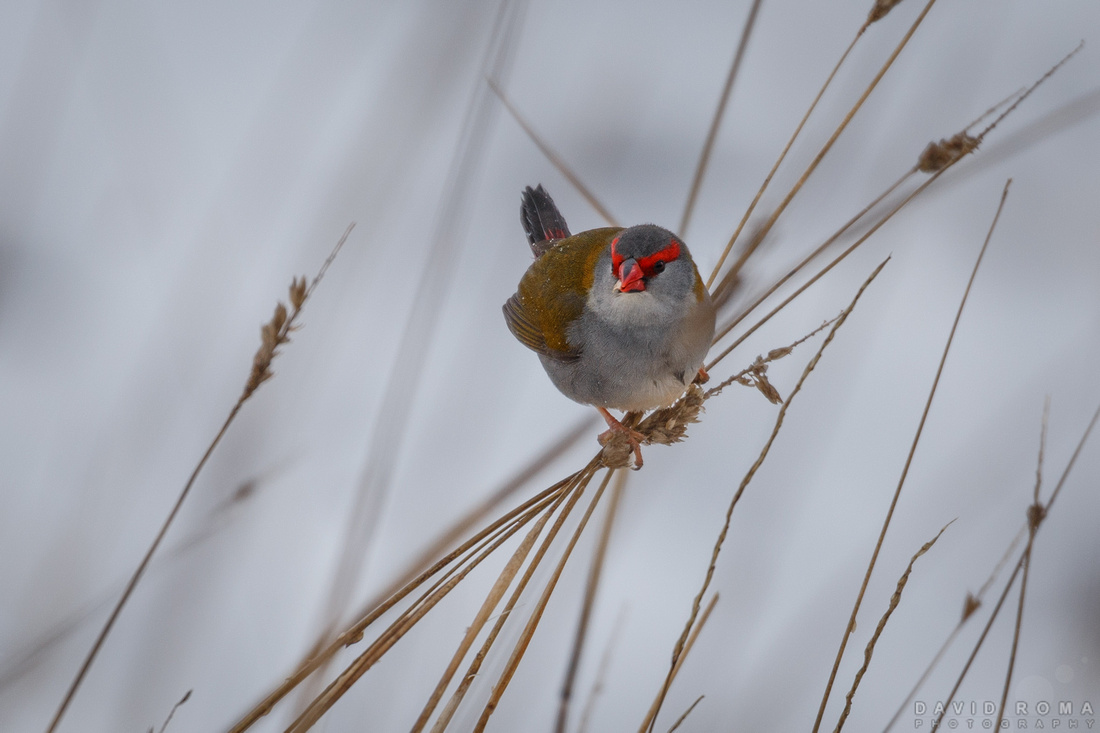 Bird in the snow

Score! How cute is this little guy in the grass and snow. He looks like a miniature puffin bird to me. No idea, if anyone knows comment below :) There were a whole flock of them. They kept skipping from one area to the next as I walked toward them down the road. They kept this up for about 500m before finally flying in to the forest. 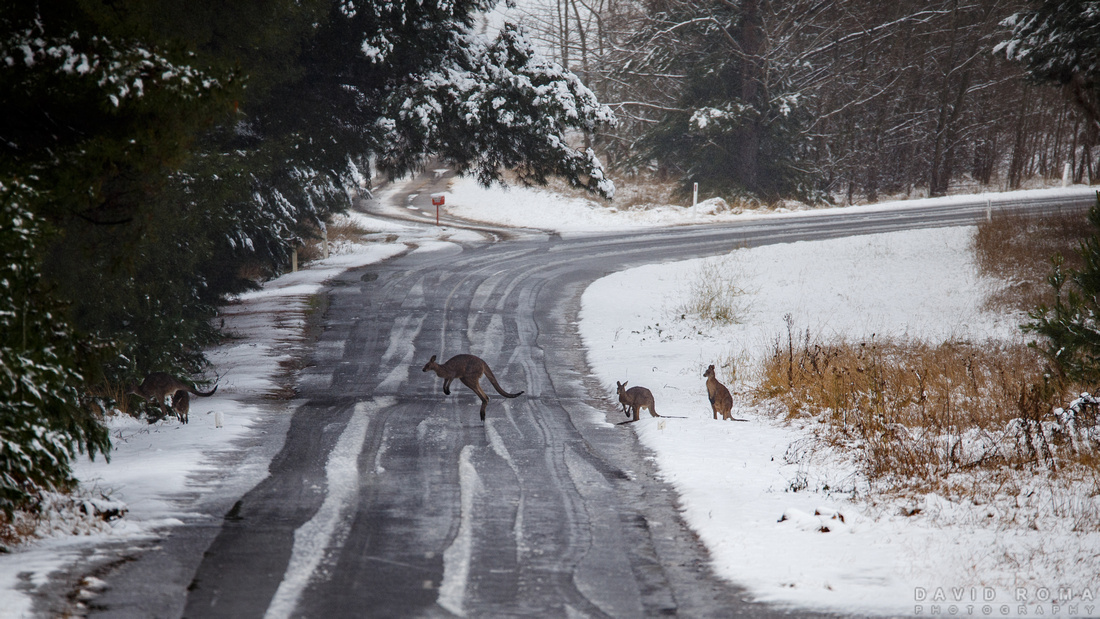 Kangaroos making a break for it

I was on a roll with wildlife.. Correct lens on and managed to capture these cold Kangaroos seeking greener pastures! 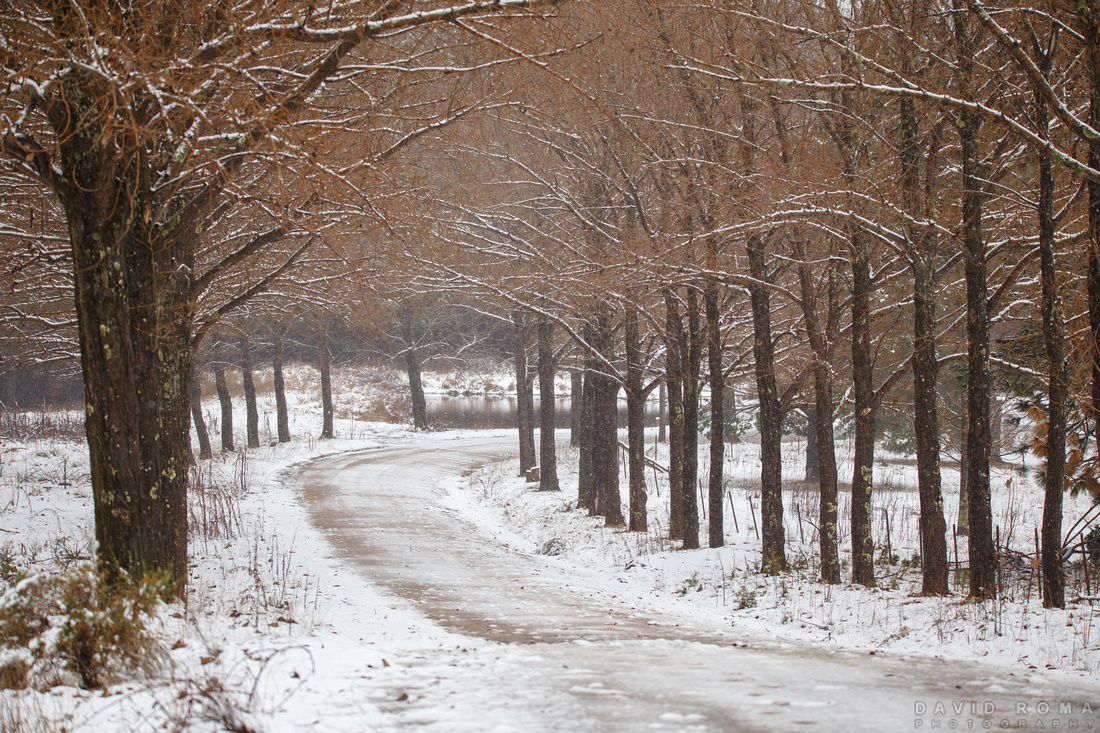 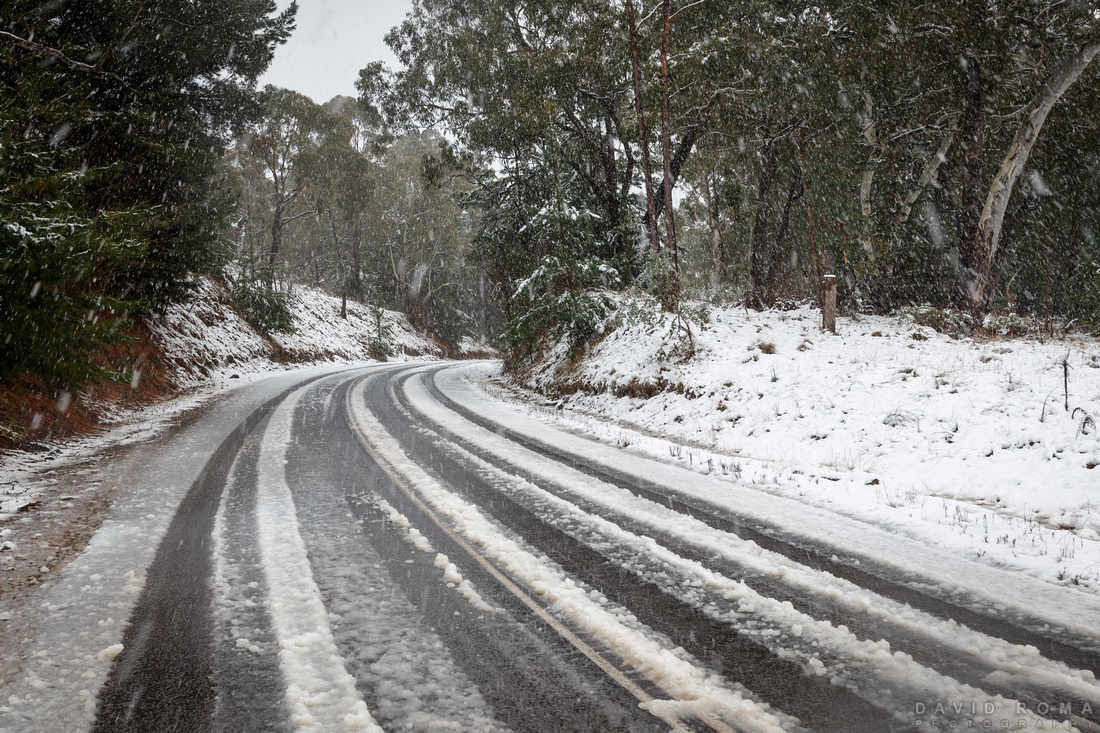 The main road was starting to get pretty hectic. Time to turn around I think.... 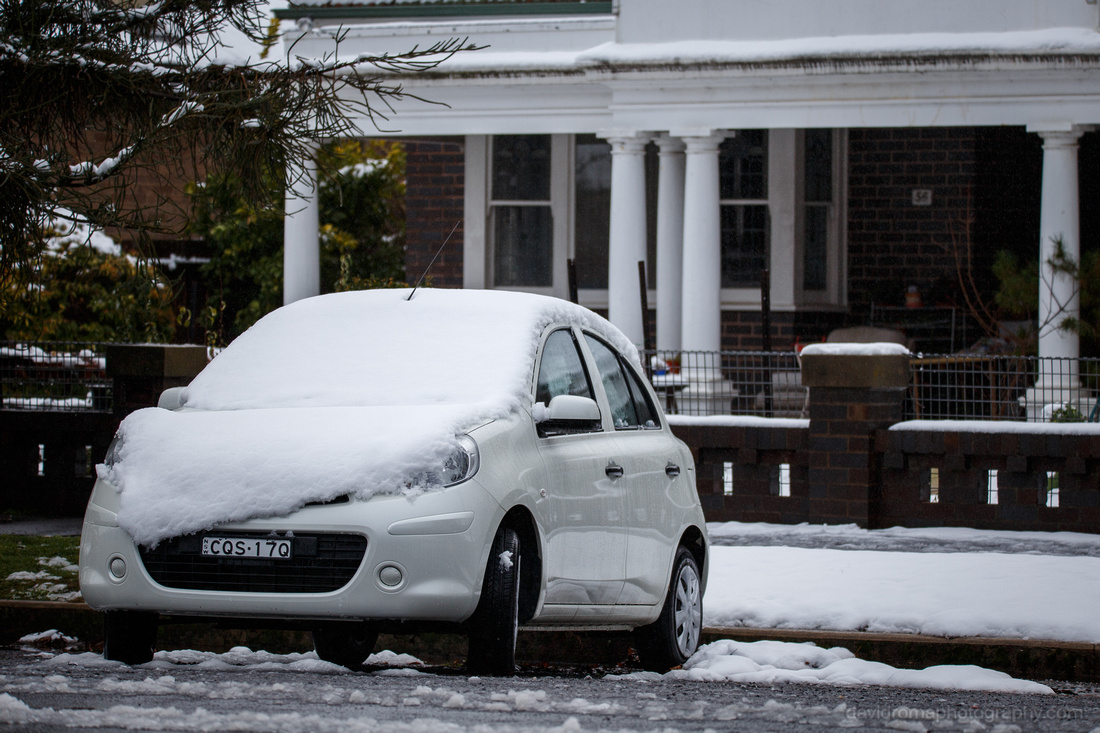 Going to need more than a credit card

After this I went in to town in search of a nice warm coffee, some fuel and a muffin (yes in that order). This is a random house in Orange with a very well covered car. 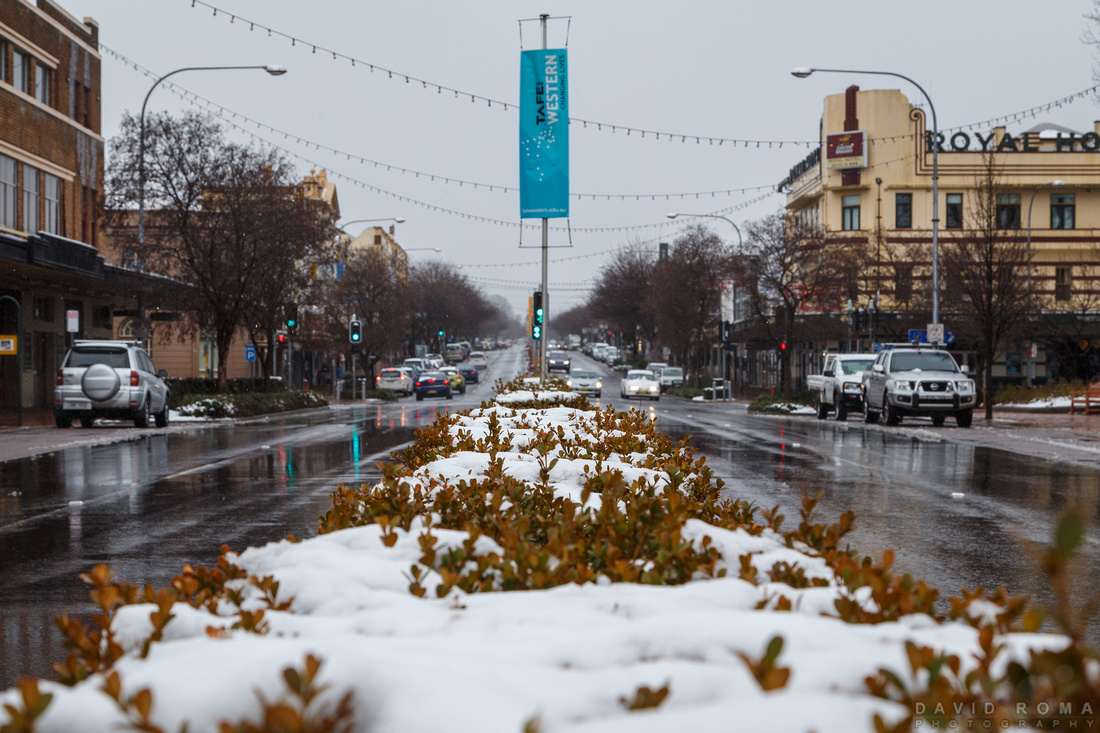 I love a bit of symmetry. This is a fairly iconic view of orange I thought. Much of the snow had melted from the road itself. From here on out, most of the shots were taken in the sleet and snow. I am glad my camera is weather sealed. 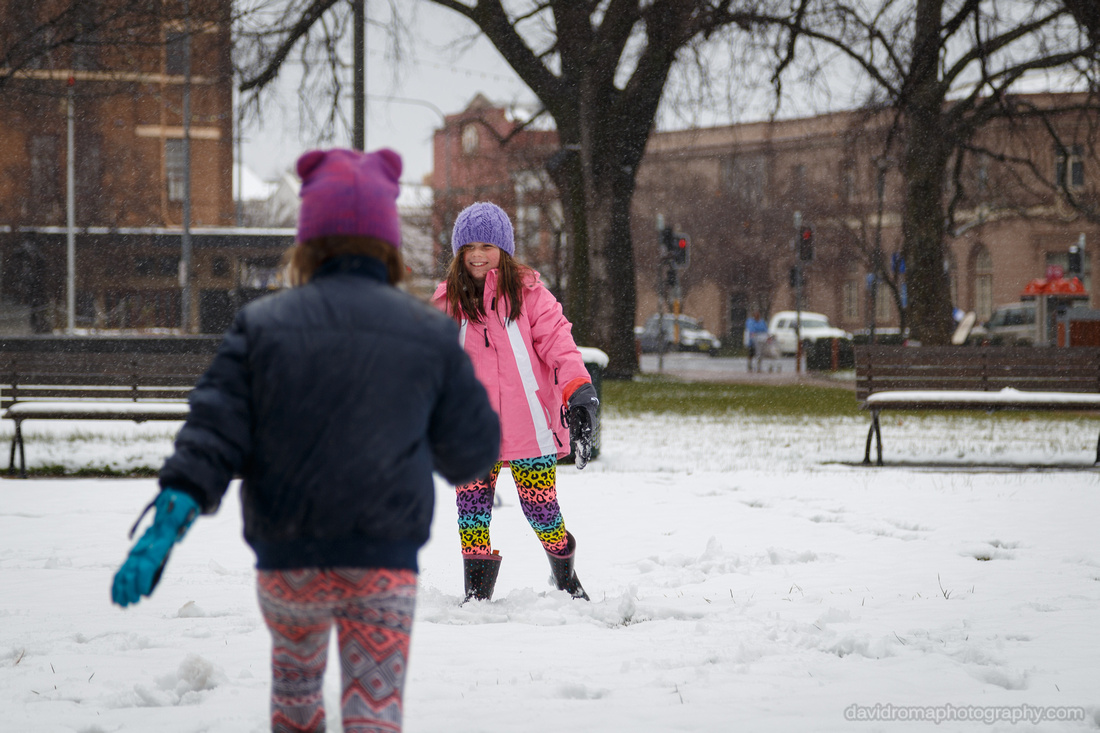 Time for some snow fights! These kids were having a blast in the Robertson park.

Dad always seems to cop it! 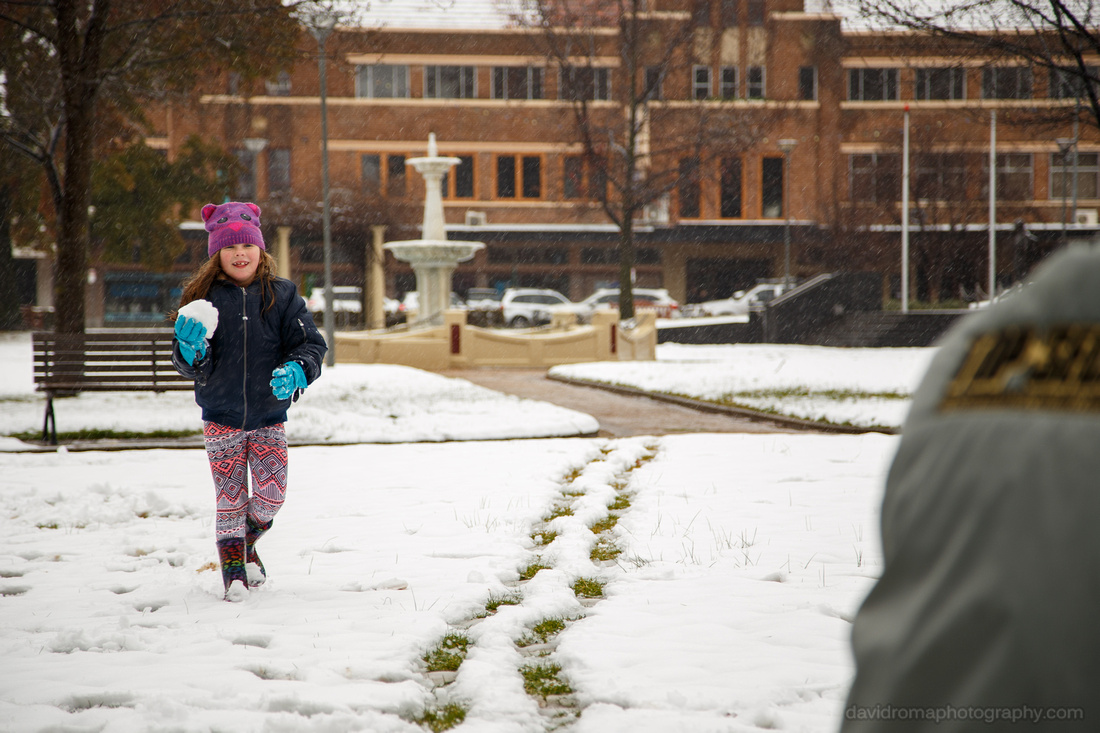 Do you think I warned him what was coming..... Not a chance. 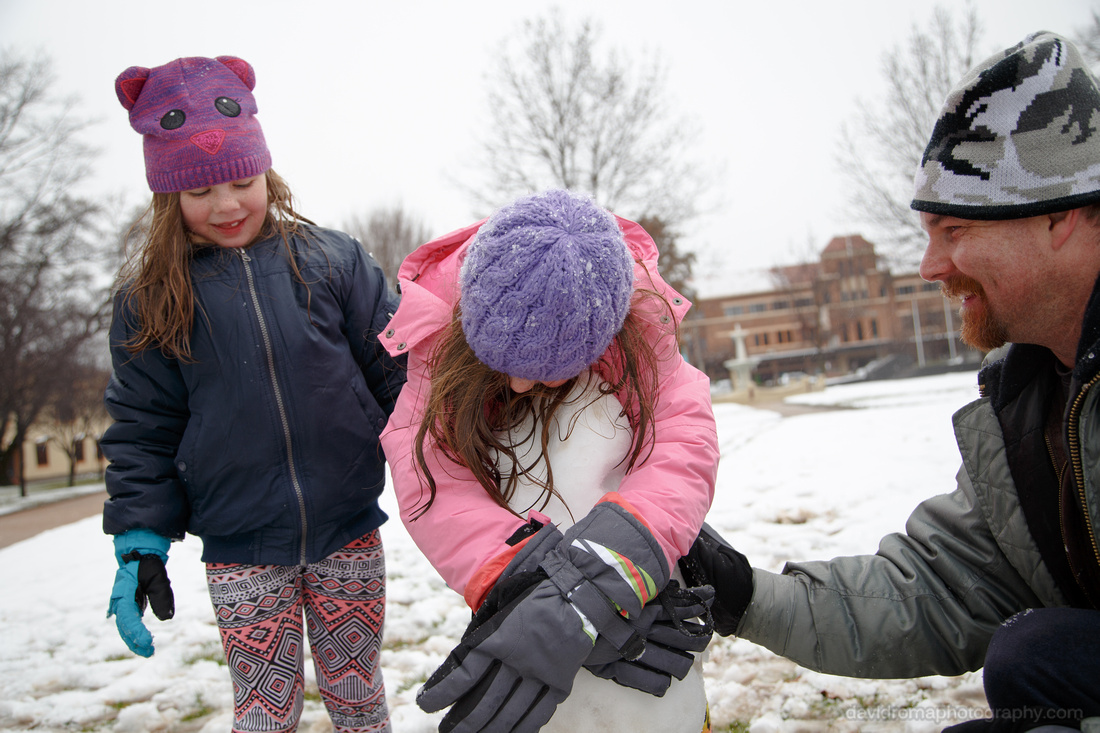 Exhausted... Thanks for posing guys! 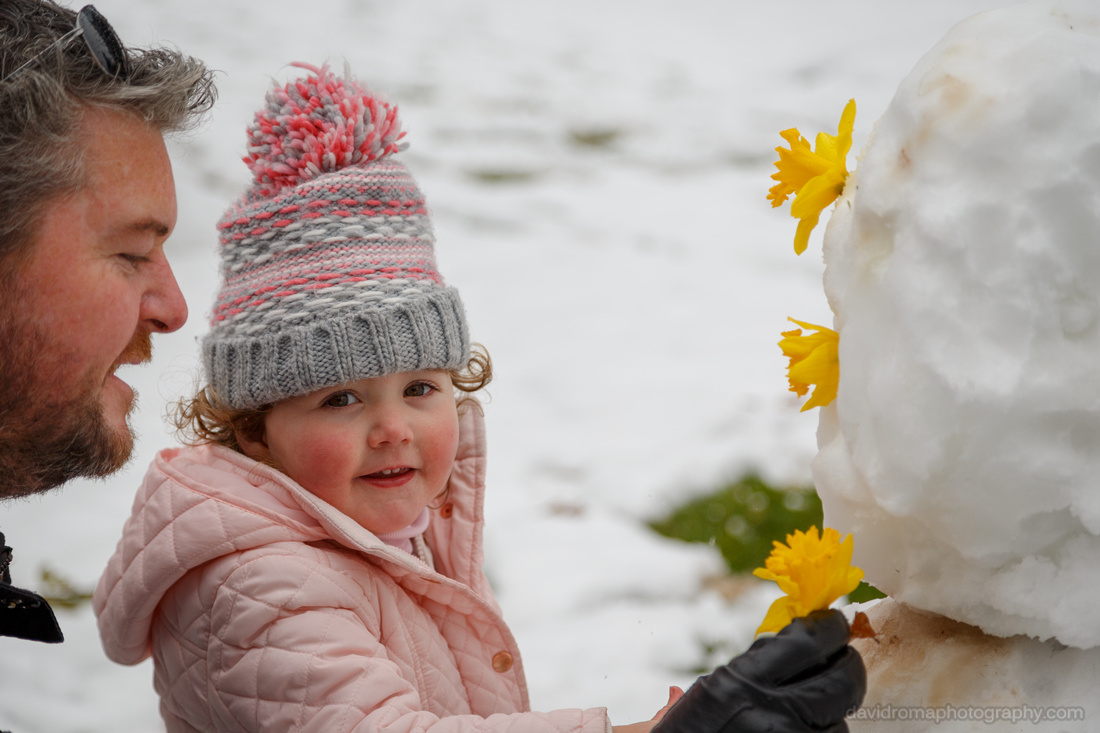 Off to cook park for some classy Snow man action. You have to use the tools at hand and these daffodils did the trick. 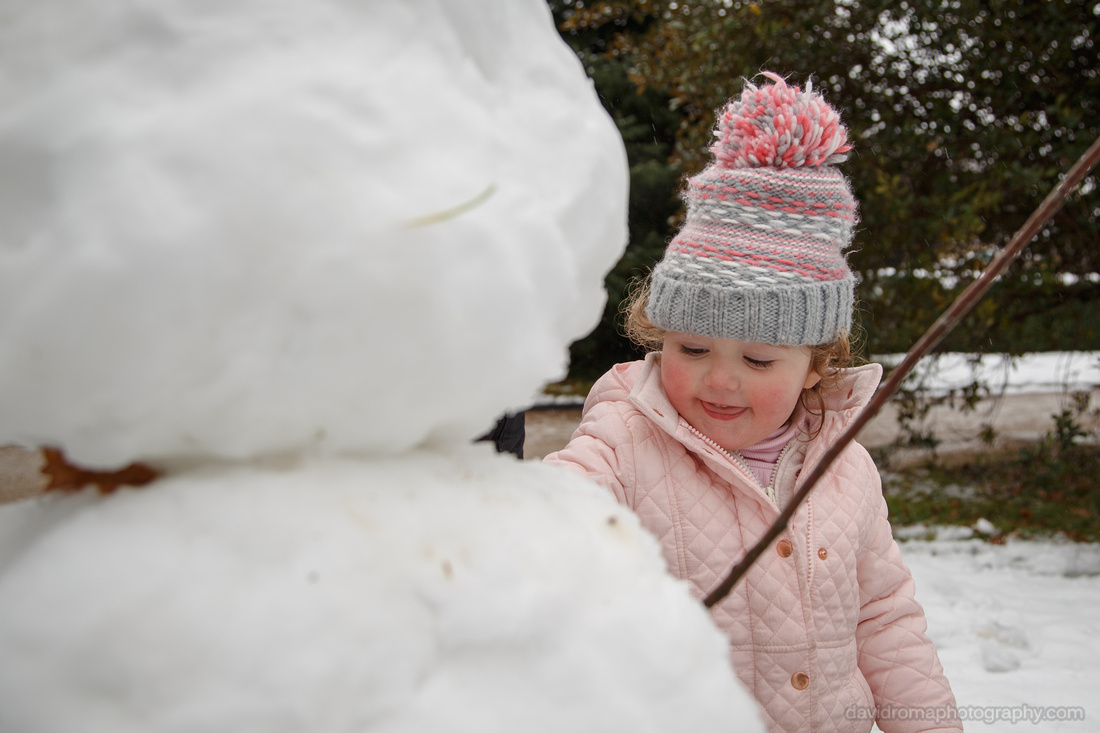 How cute is this little girl. She has totally got it sussed. 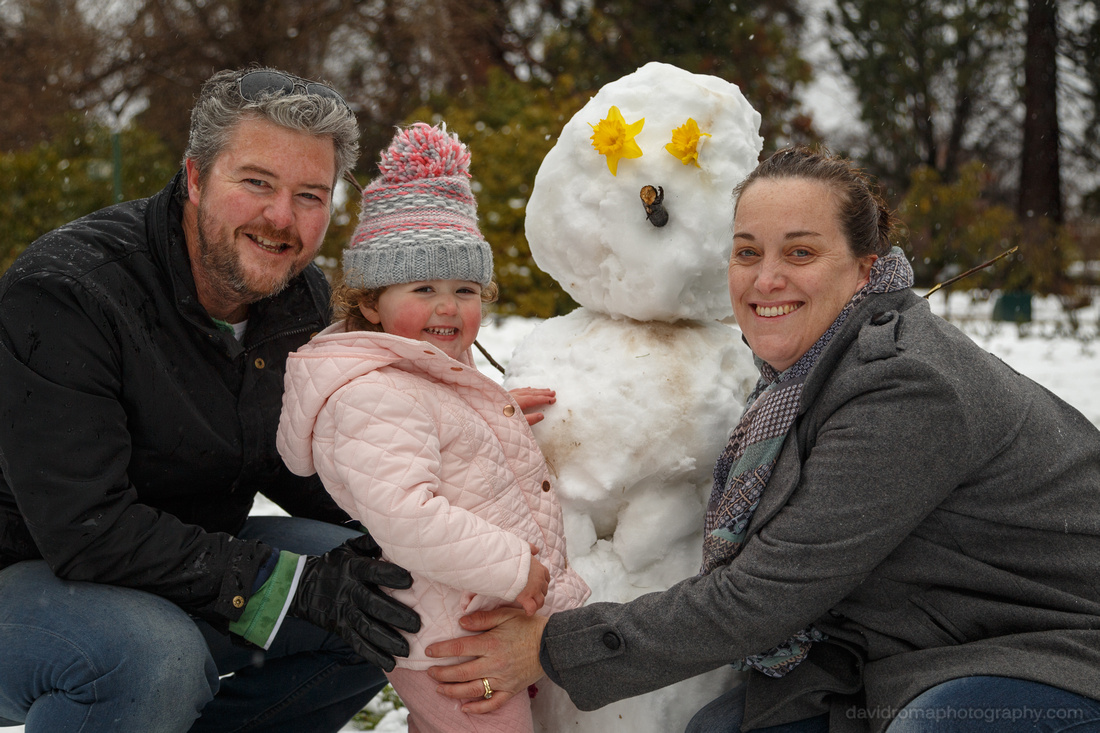 A very cute family. Thanks for posing. And a big thanks to the power of the internets to for finding out who they were so I could get this image to them. If you know anyone else in these pics, please feel free to share the link so they can see them. 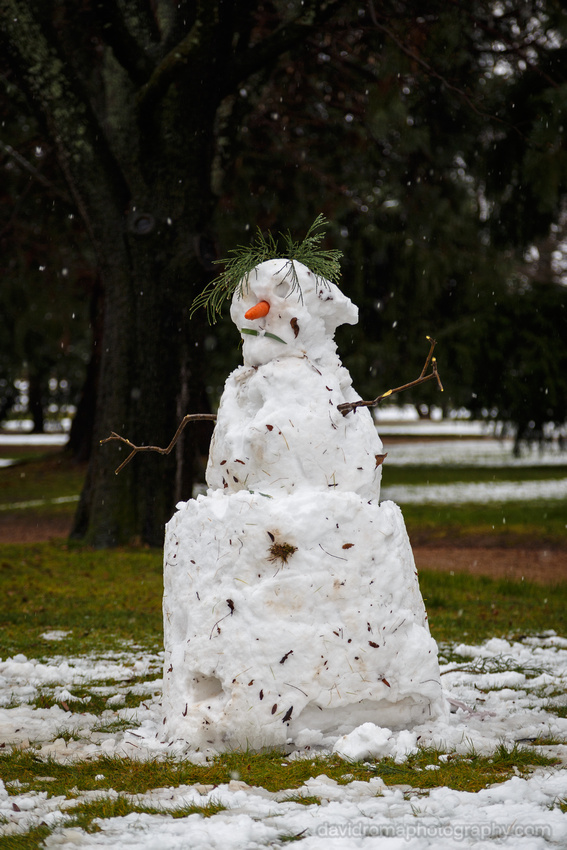 Another massive snowman in cook park. It had a slightly halloween look to it though I think. 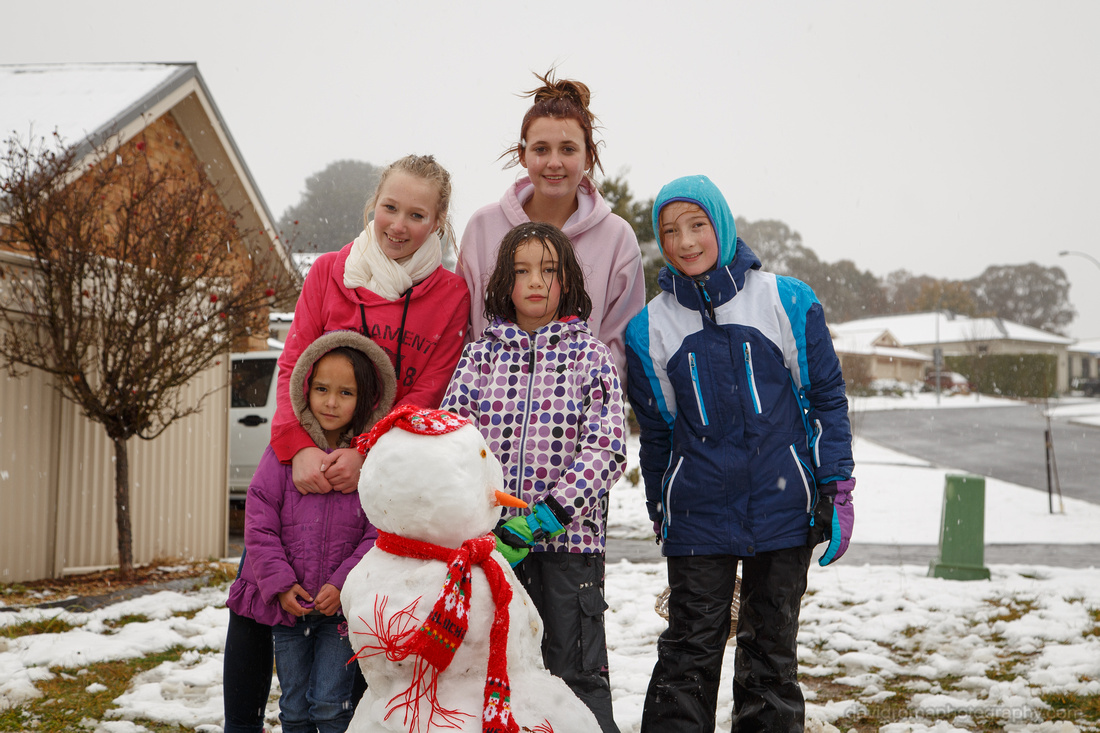 Driving the streets there were so many people making snowmen in their front yards. I didn't catch the names of these people, so if you know them, send through the link :) 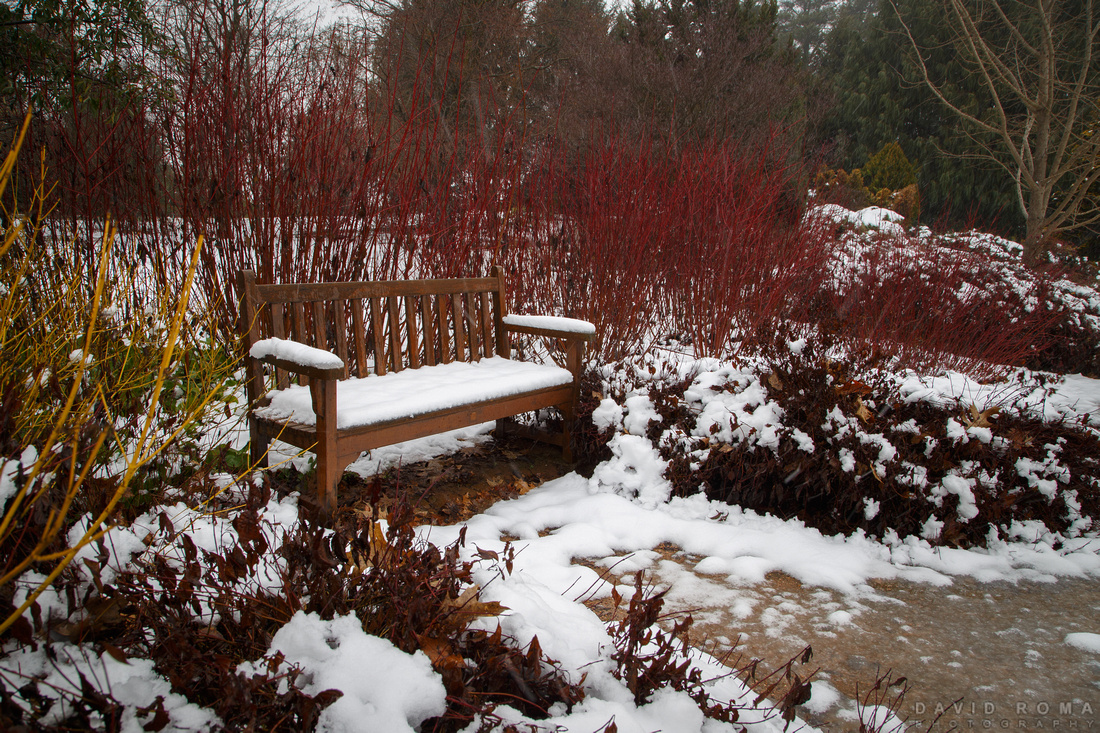 Off to the Orange Botanic Gardens now. Looks like a chilly place to rest. 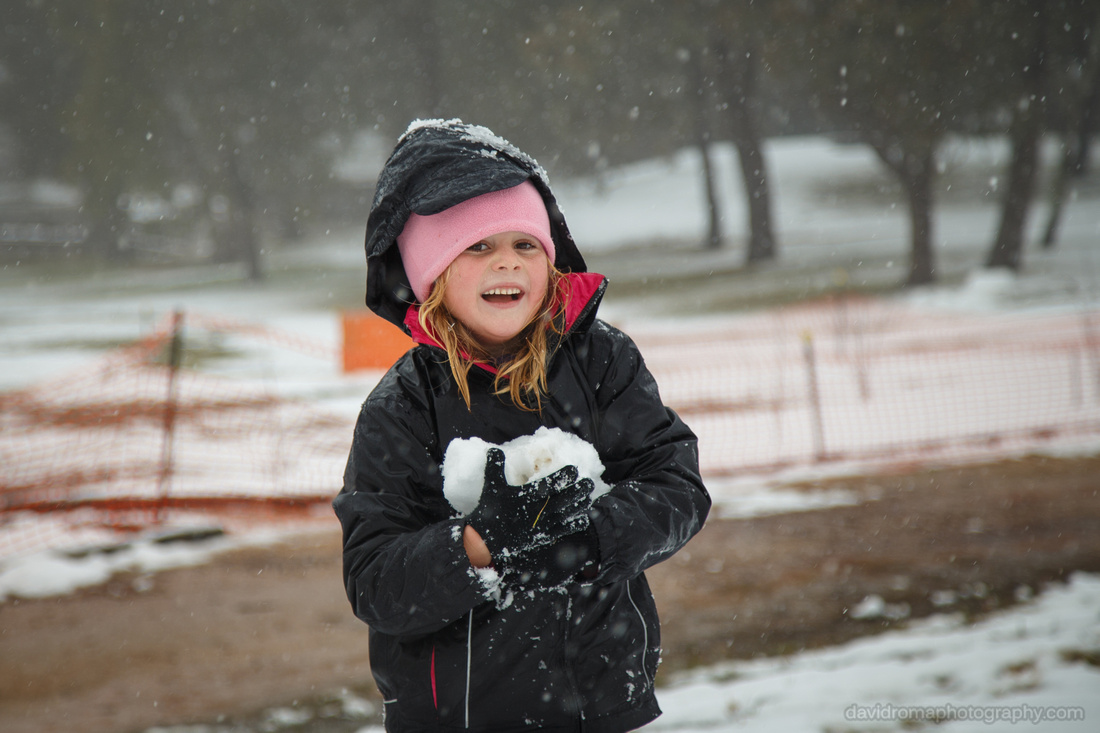 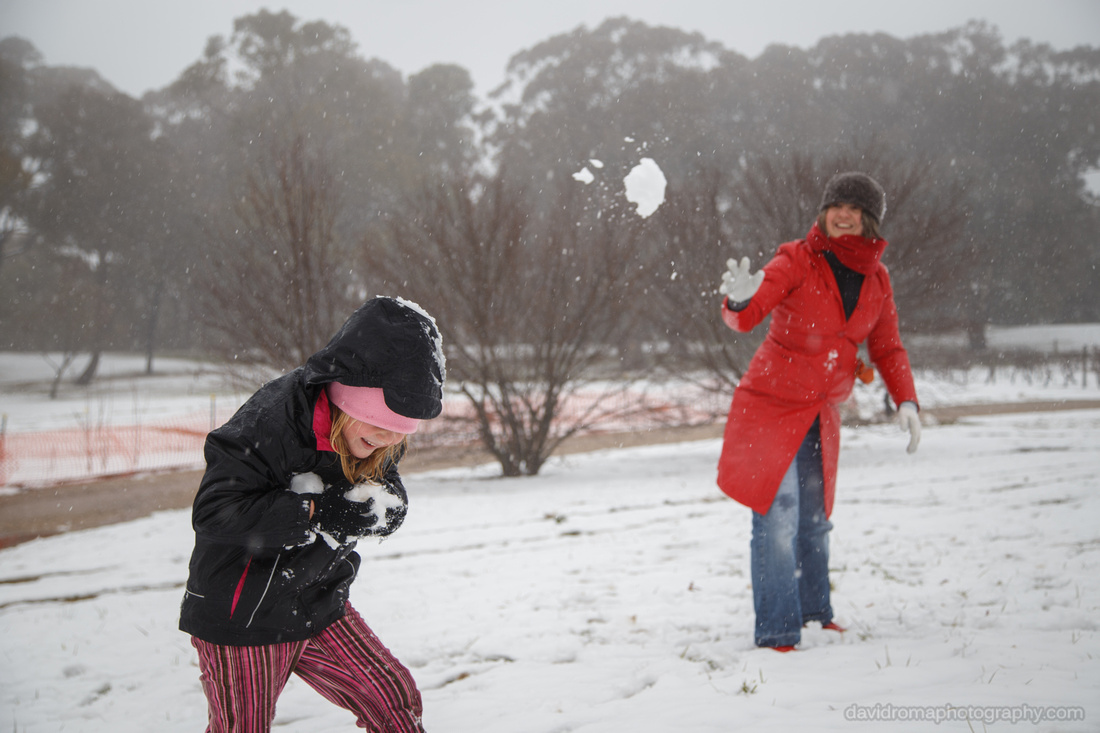 But don't worry, she got as good as she gave. 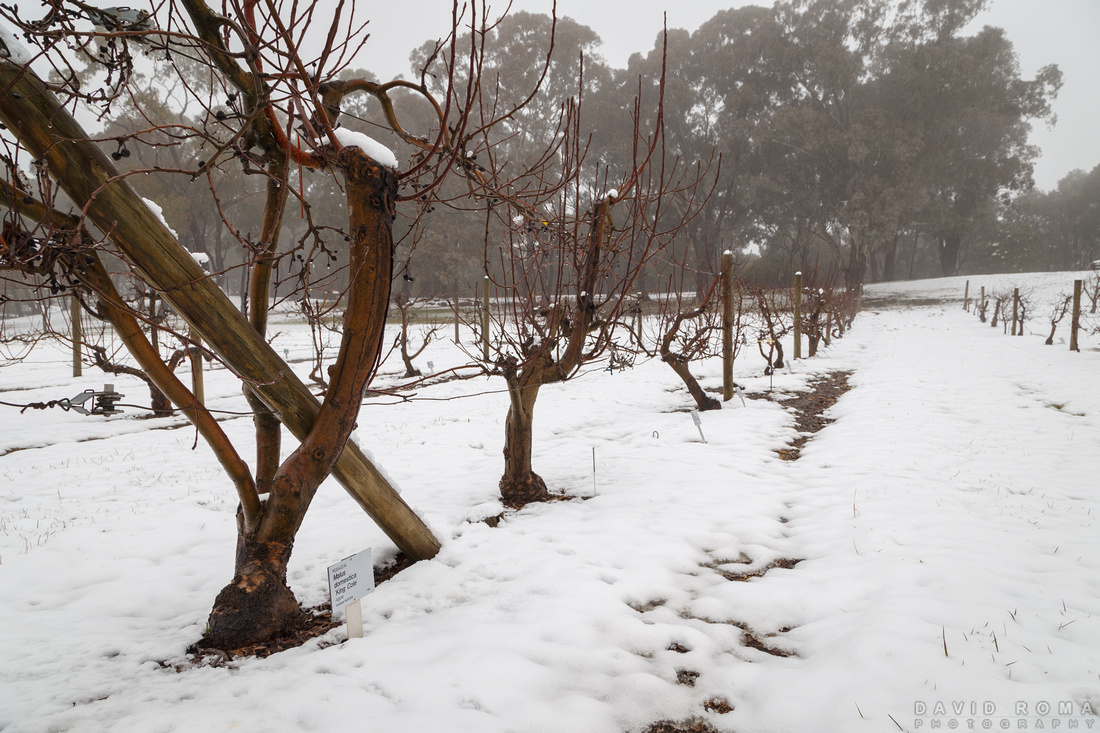 The vines made for a nice composition in the gardens. It looks so different under snow. 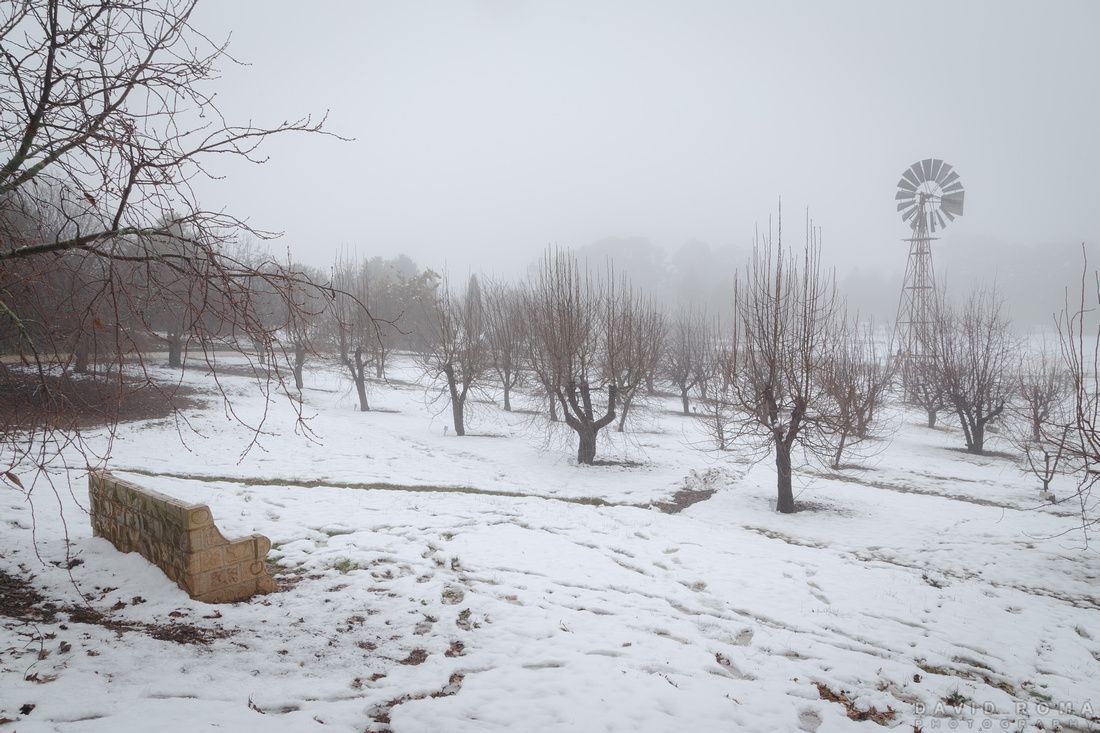 Nice views in the Botanic Gardens in Orange. 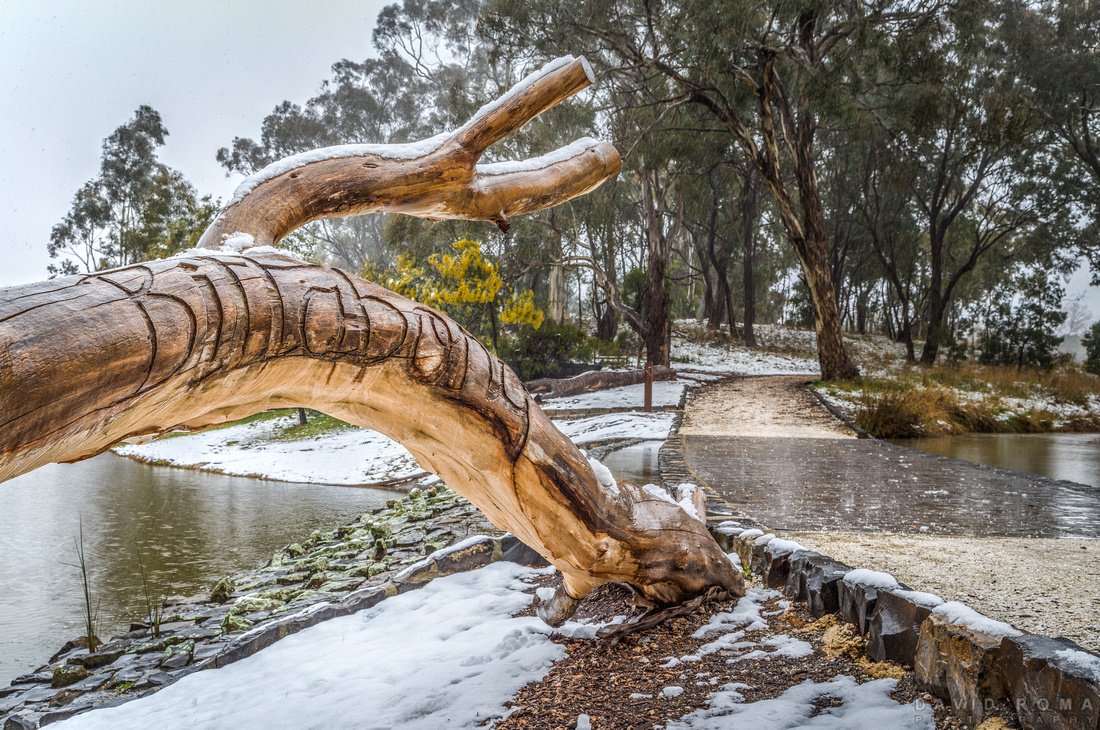 I really liked this log near the dam in the park. It had Billabong carved into it and made for a cool shot. By this stage i was quite wet and I was loosing feeling in my fingers and toes! 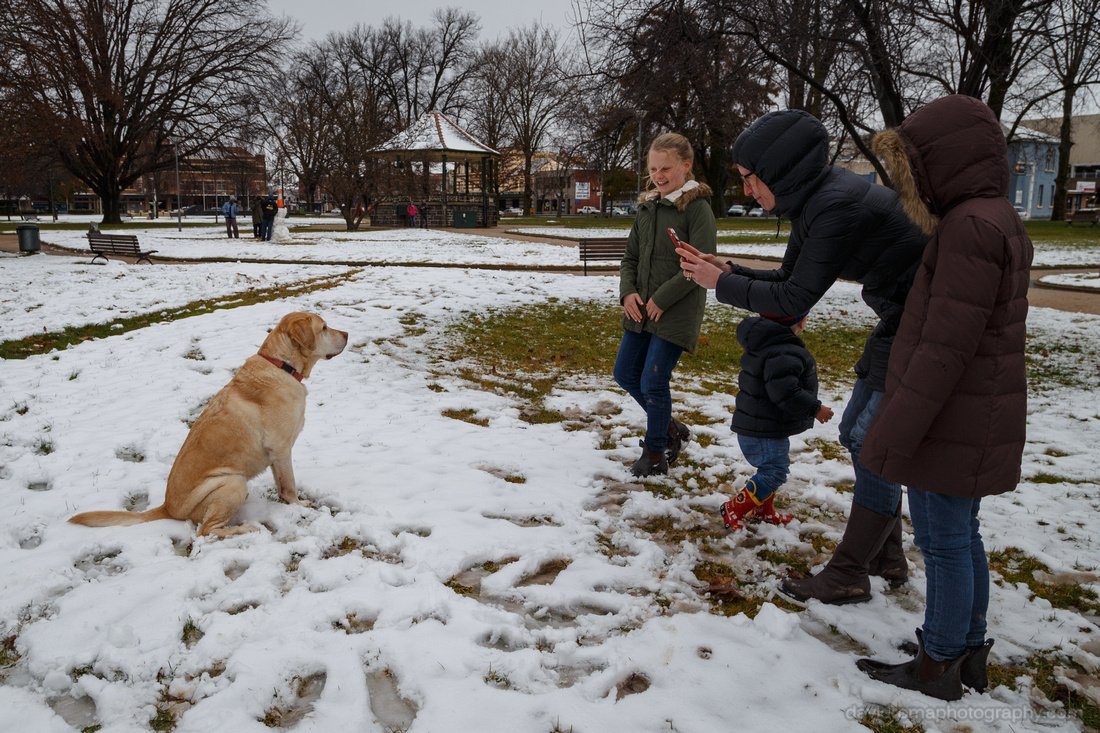 One last stop off at Robertson Park. It was the first time this dog had ever seen snow and he was loving it! I even got a shot of him jumping up and catching a snowball in the mouth. brrrrr. 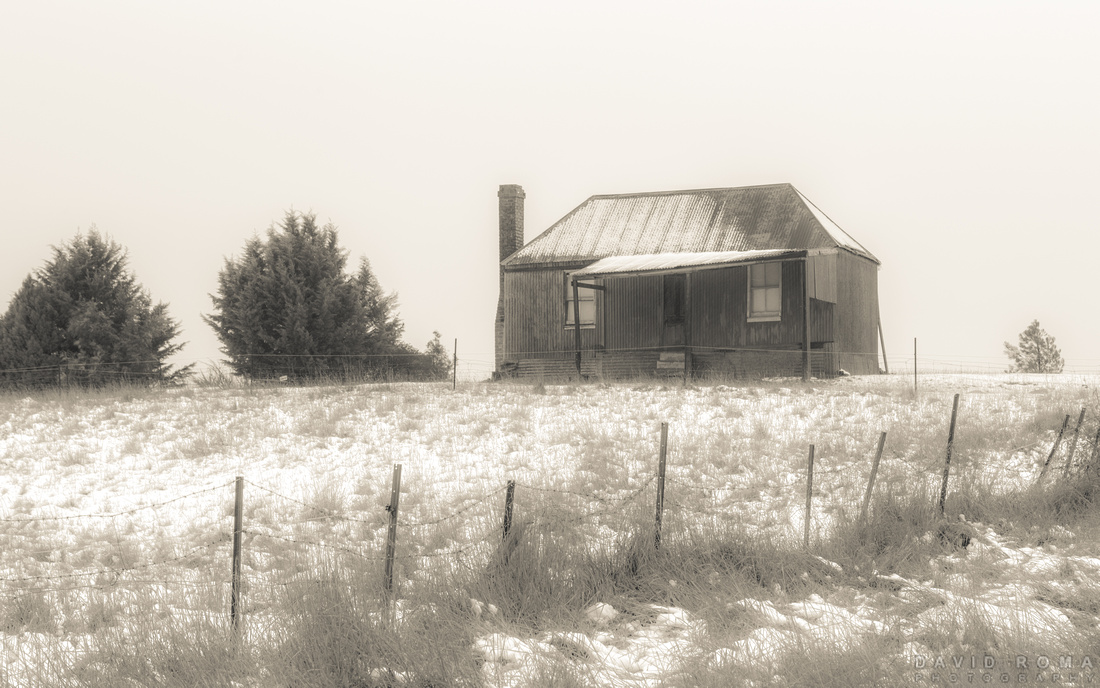 On the way home now I stopped of for an old shack beside the road. I liked the dreamy feel of this in creamtone.

I hope you enjoyed my pics of the big freeze! It's always a nice to have some snow about the region. You can use the social media buttons on this page to share or like.