It has been great getting out to the Gardens of Stone and the unprotected parts of the Newnes state forest. Such hidden wonders.

I thought I would put together a blog post showing some of my favorite images from my adventures...

A part of the unprotected area to be included in the Gardens of Stone this is just out of Lithgow. I was really surprised to see snow still on the rocks at sunset the day after the snow falls. I would have loved to get out there when the snow first fell. Hope you all had a good weekend. 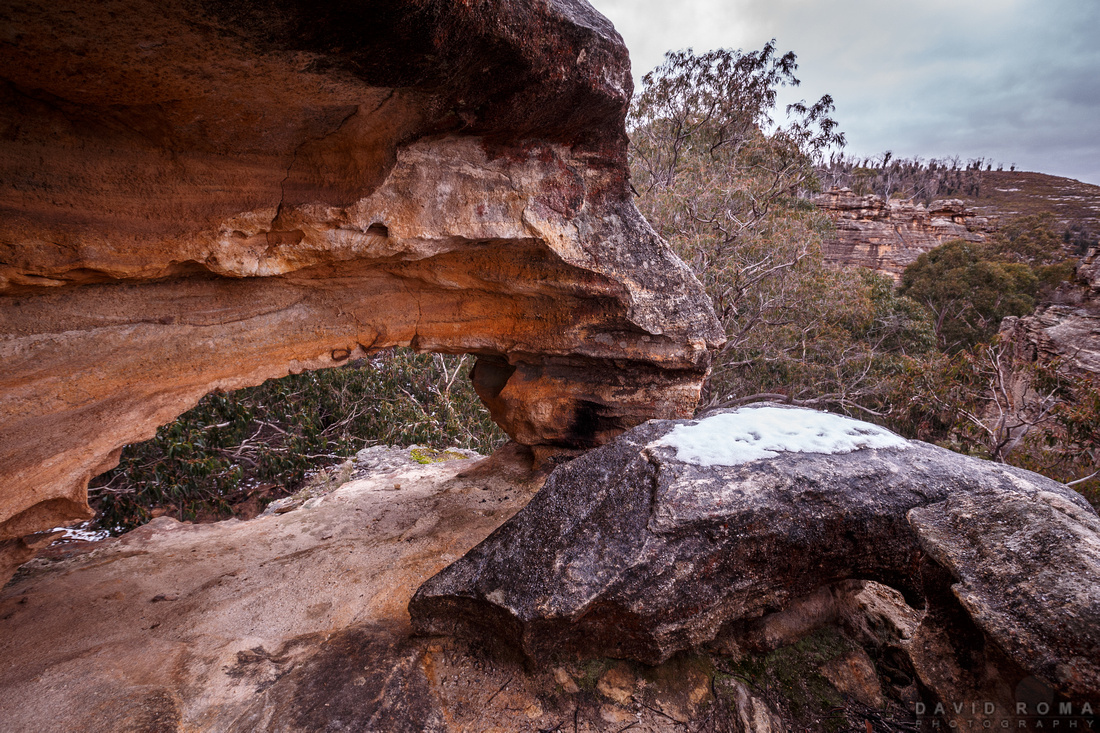 Pagoda SnowUnprotected area of the GOS just out of Lithgow.

What a spectacular view looking out over the gorge that carne creek runs through. It was a moody cloudy day, but you can just see a ray of light shining on the furthest cliff. I love the way the valley winds it's way off into the distance. 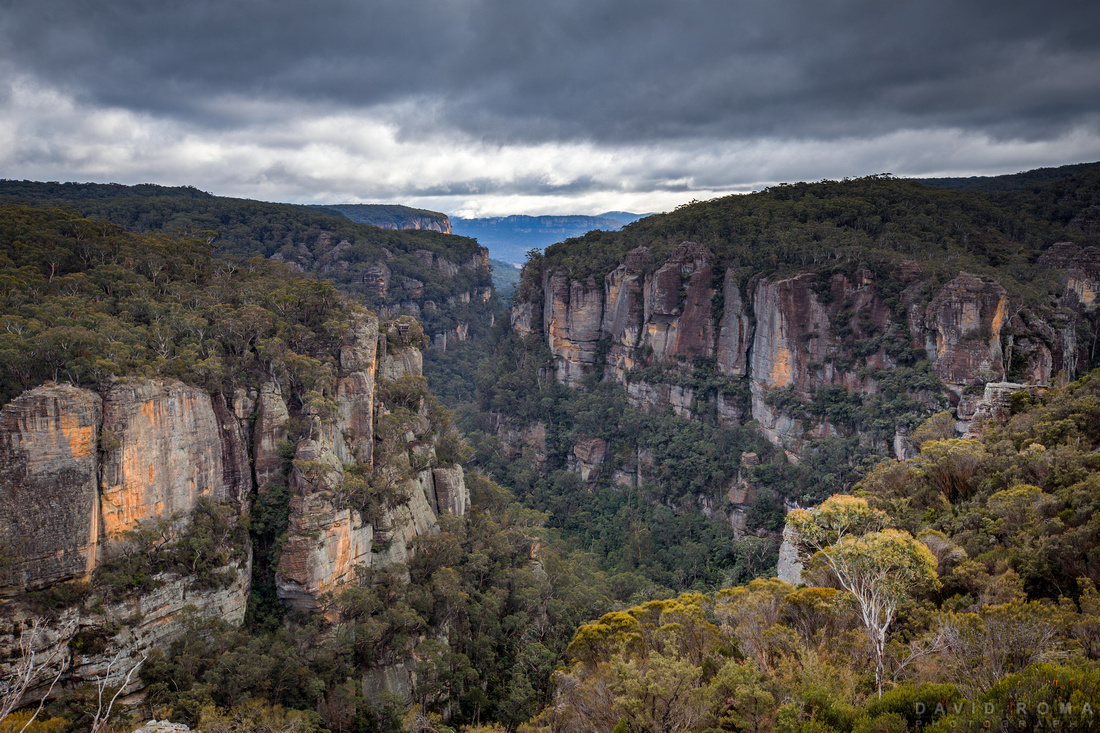 Living on the edge

There is something about this shot I really love. I think the contrast of the trees against the soft tones in the valley perhaps. These trees are certainly living on the edge. 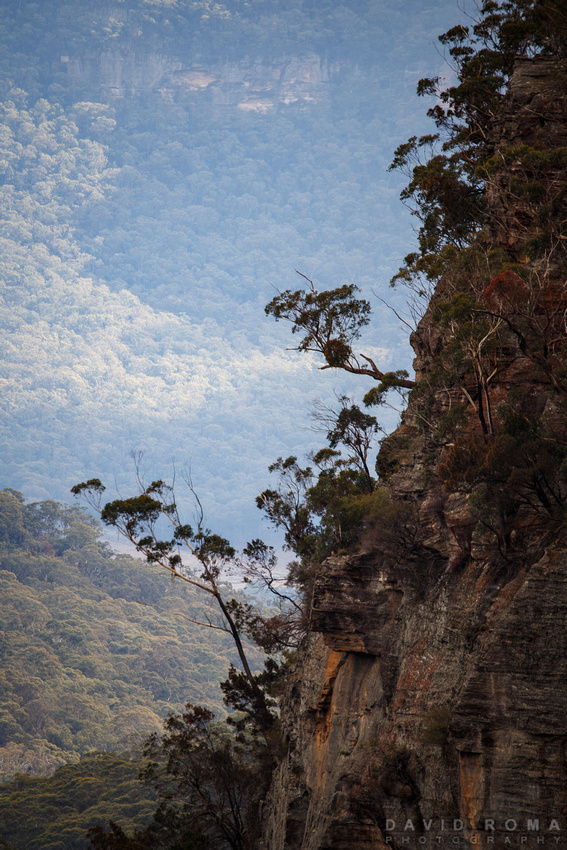 Well something a little different this Monday evening. I like to mix up my photography, from the vastness of the milky way to the seemingly insignificant rock on the ground. I spotted this one on a trail through the Newnes state forest while photographing for the Gardens of Stone. You would not think it from the outside, but it has such amazing layers of colour. Now if there are any mineral experts out there I would love to know what the colours of rock are and their significance. 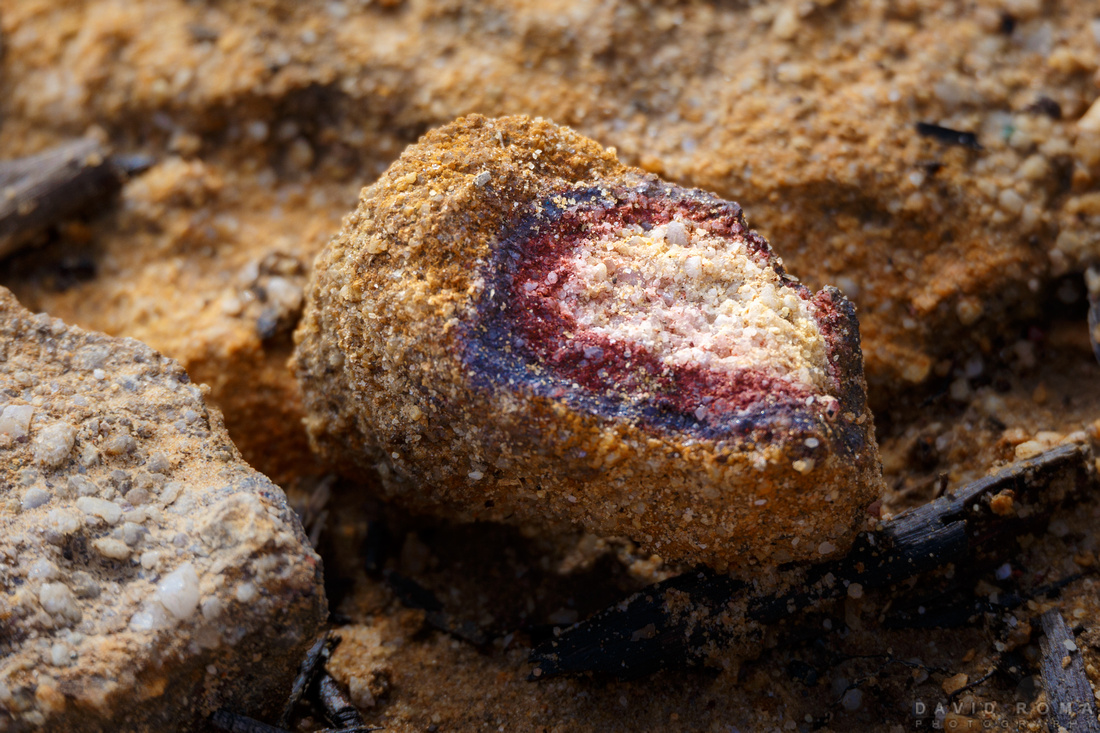 Rainbow Rockamazing coloured rock in the gardens of stone

Pagodas for lunch. This is a shot of pagoda in front of the cave known as Devils Throat. I love all the different textures and sorts of rock in this shot. 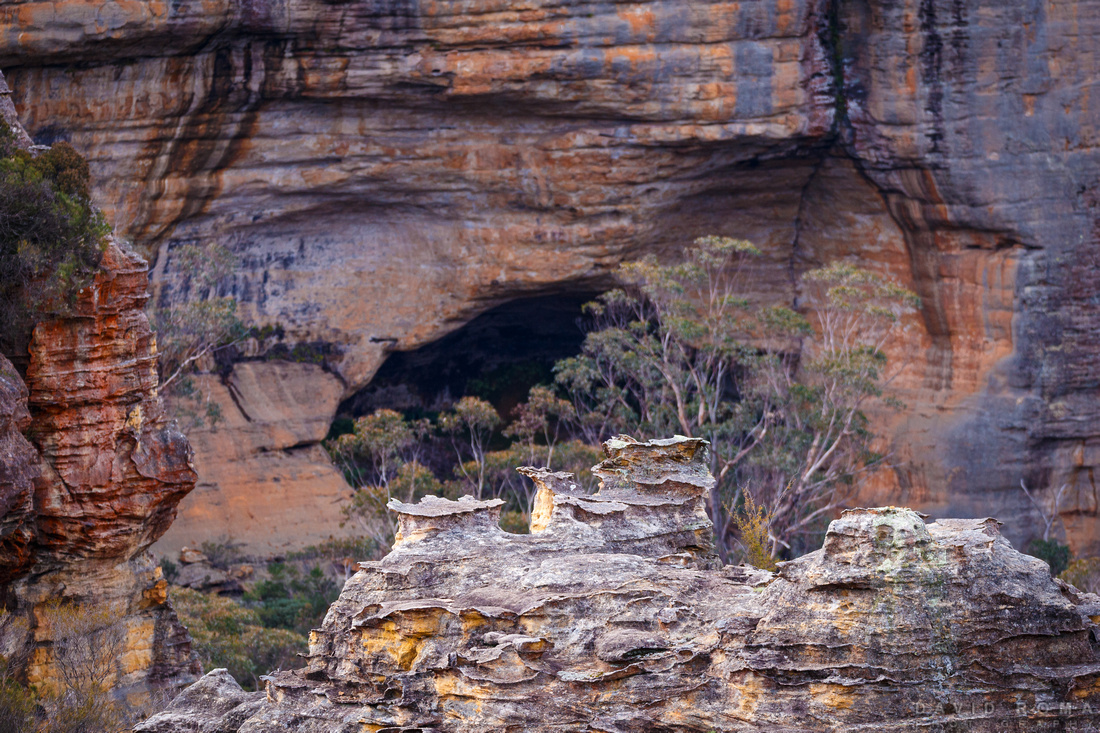 Devils ThroatPagodas for lunch. This is a shot of pagoda in front of the cave known as Devils Throat

The Lost City is a location in the Newnes State forest which is currently unprotected. It is not very well known, perhaps because of the hecktic 4wd access track. A big thanks to David for getting me out and back at night in one piece.

The Milky way is truely beautiful. It always does my head in how much is out there that the naked eye simply cannot see. But with the aid of careful planning, a good quality camera, fast lens, long exposures, and careful post-production, it really comes to life! This image is a stitched panorama of 6 individual images. I just couldn't fit it all in a single frame. The shutter speed is maxed out before star trails started becoming noticeable.

It was going to be the perfect night for a great shot, middle of winter with nice cool crisp 'non-distorty' air. A new moon (ie. no moon, that was setting early anyway). Clear dark skys... That was at least until the clouds rolled in before we got there. We actually spent most of the time taking other pictures in the snow and rain. There was still snow on the plants around which frequelty dropped off making a sound and some movement, as if there were animals around bushes.

Fortunatly for about 15 minutes there was a gap in the clouds large enough to get a clear shot of the milky way right over the top of the lost city pagodas. I think some portions of the image were still masked by cloud but for the most part it was amazing. Between each shot I had to quickly wipe the water off the lens from the rain before the next.

It always is nice to remember to put the camera down, and look up. It is so awe inspiring.

How little we truly do know... 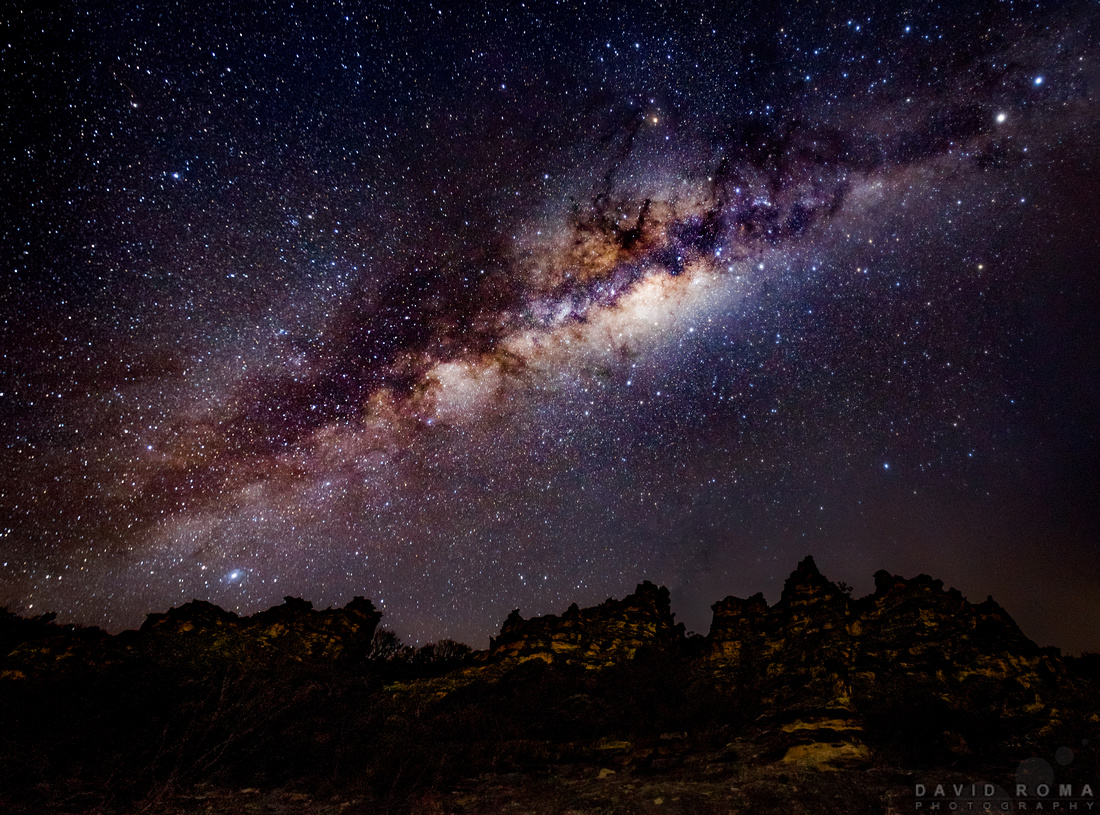 Made it just in time to see this spectacular sunset over the Pagodas. It only lasted about 5 mins so had to be quick. It was nice to meet some of the Sydney Morning Herald Clique group led by Nick Moir and Wolter Peeters. You can see some of them making the most of the magical light on the pagodas. I actually had to pull some saturation out of this image because it was maxing out the sRGB colour space which is the most common standard monitors support. 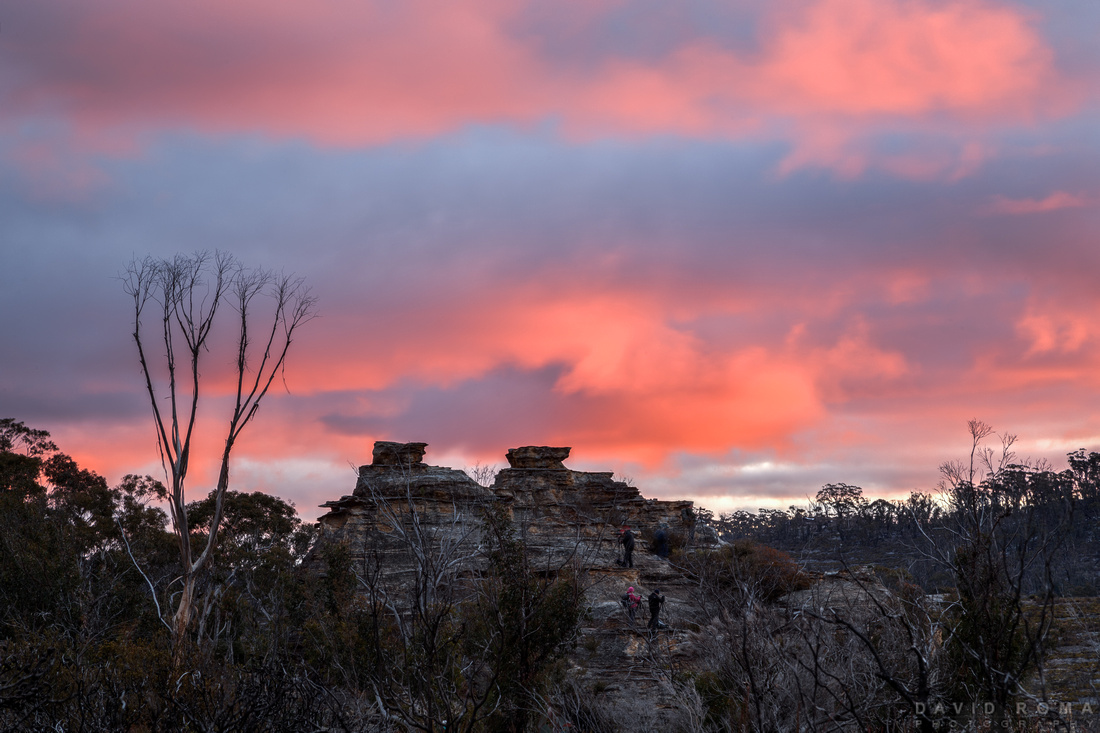 Well I finally got to get some photos of the pagodas at sunset. If the Colong Foundation for Wilderness is successful the sun will set on much of the Newnes state forest and become protected with the extension of the Gardens of Stone National Park.
This one is taken from the top of a pagoda with a nice little puddle on top. I positioned to get a nice reflection of the one cloud that was lit up from the sunset.

I have been keen to try out some new techniques. This image is a composite of 6 others all taken at different focal points to achieve infinite depth of field while avoiding diffraction. You can see the image is in focus from a few centimeters from the lens all the way through to the trees on the horizon. A much easier way to get a similar effect would be to use f22 and focus about 1/3 of the way in the image. But that would result in a softer image. 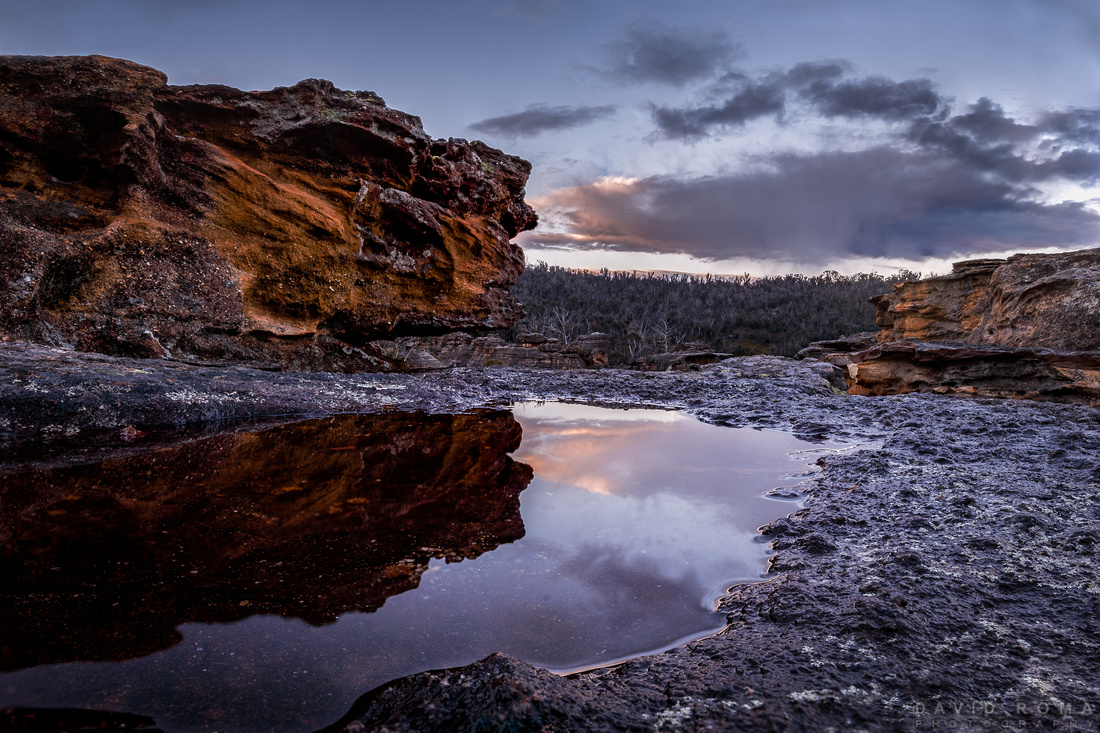 One of the many hidden locations in the NSW state forest. A big thanks to Yuri and the leaders of this walk for taking me to this location. Not a chance I would have been able to find it by myself! You would never guess there is anything like this from the nearby dirt road. It was good to do some good old fashioned bush walking, no fancy boardwalks or man made stairs here! Oh, and if you were not impressed, look for the people in this image to give you an idea of the massive scale of this cave :) 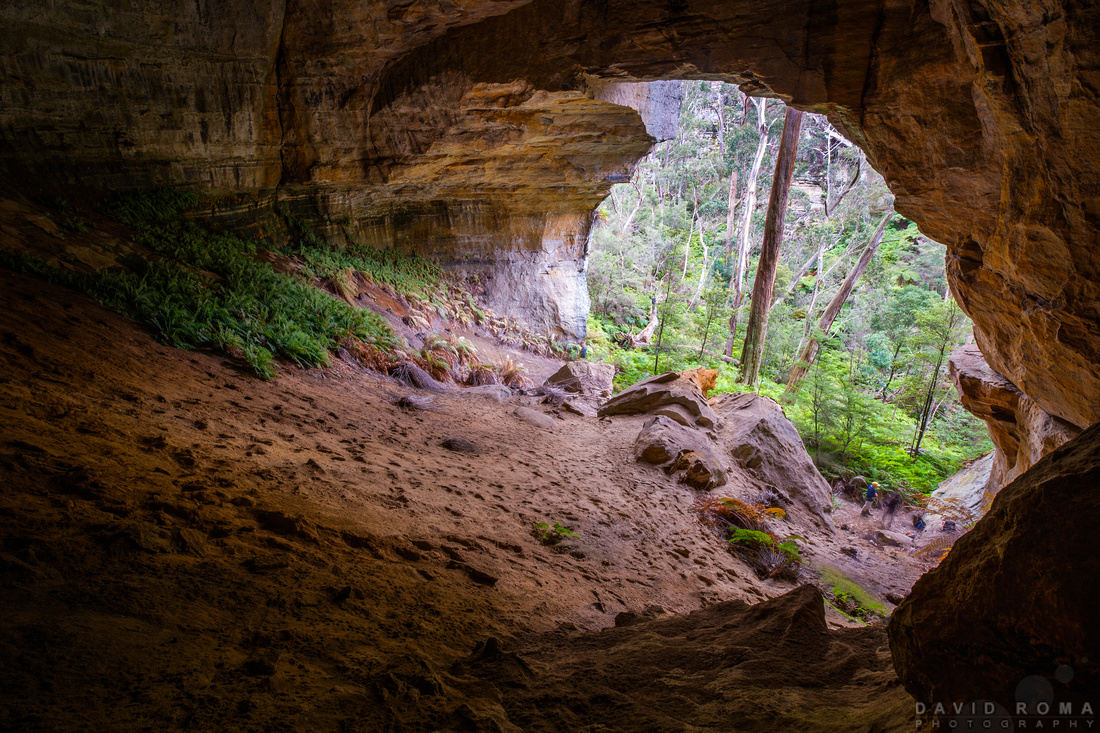 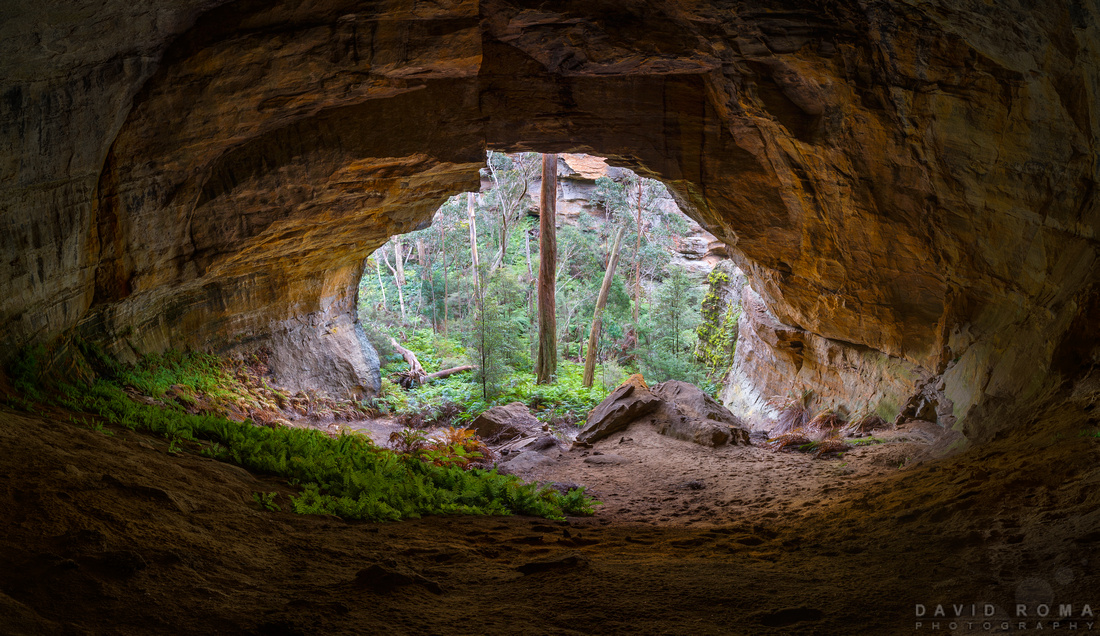